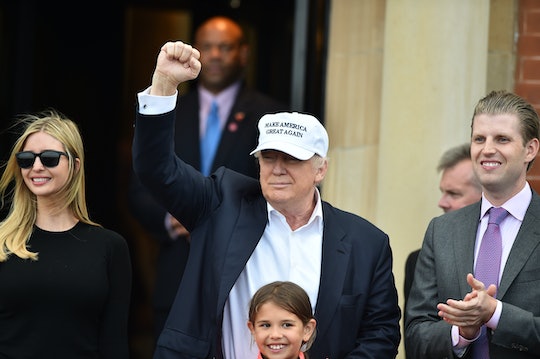 It's hard to keep up with all the news surrounding the Trump family, and a new report in Forbes Tuesday is only going to complicate matters. After scouring Trump Foundation and Eric Trump Foundation tax records, the outlet claimed that Donald Trump allegedly funneled kids-cancer charity money through the family foundations until it came back as revenue. The White House and the Donald J. Trump Foundation did not immediately respond to Romper's requests for comment.

Regarding Forbes' claims, a spokesperson for Eric Trump told Romper in an email,

During the past decade, the Eric Trump Foundation has raised over $16.3 million for St. Jude Children’s Research hospital while maintaining an expense ratio of just 12.3 percent. The Eric Trump Foundation was also responsible for building a $20 million dollar ICU which treats the sickest children anywhere in the world suffering from the most catastrophic terminal illnesses. Contrary to recent reports, at no time did the Trump Organization profit in any way from the foundation or any of its activities. While people can disagree on political issues, to infer malicious intent on a charity that has changed so many lives, is not only shameful but is truly disgusting. At the end of the day the only people who lose are the children of St. Jude and other incredibly worthy causes.

But according to Forbes' Dan Alexander that's allegedly not the case, and his review of both organizations' financial documents reveal that they may have allegedly engaged in shady "self dealing."

Like his father, Eric Trump had a foundation (though it suspended operations in December 2016 after his father was elected), and it was set up like a charity so that it could accept outside donations meant to be channeled directly to St. Jude's Children's Hospital, which provides care for childhood cancer patients. Each year, the foundation hosted an annual golf tournament at one of the elder Trump's golf courses in Westchester, New York. The affairs were usually lavish, complete with Hooters cocktail waitresses, cigar bars, and Real Housewives cast members.

According to the report, since he first began hosting the event in 2007, Eric Trump had allegedly told attendees that he was able to utilize the family golf course for the event, free of charge — there was little to no overhead that way, so all of the money went to the sick children. In all, the events raised a whopping $16 million for the hospital over the years.

Originally, from 2007 to 2011, Eric Trump's Foundation was indeed throwing the event for about $50,000 in overhead costs, all while raising hundreds of thousands of dollars, so it was largely true that all of the donations for the event were going to the hospital. But then — allegedly — something changed.

Here's Where It Gets Tricky

The Trump Organization, the Forbes report claimed, started charging Eric Trump to use the course after 2011, just like it would any other charity looking to host a day-long golf event. To help offset the costs, the charitable Donald J. Trump Foundation (President Trump's philanthropic organization) allegedly "gifted" Eric's foundation $100,000, which then allegedly got paid back to the Trump Organization after it billed Eric for the tournament. As Talking Points Memo explained it, "One person Forbes interviewed who worked for the the Trump National Westchester at the time said the money was meant to offset the increased costs, and, therefore, meant to end up in the Trump Organization’s coffers."

Both the Eric Trump Foundation and the Donald J. Trump Foundation also allegedly donated money to charities that eventually (allegedly) paid his businesses for events (for use of the Trump Organization-owned golf courses, for example). None of them were St. Jude's.

Another troubling spot in the Forbes account: Trump allegedly charged his son increasingly more each year to use the golf course, and Alexander, who talked to professionals who run tournaments like this, couldn't figure out why an event would cost the estimated $300,000 that the Eric Trump foundation was shelling out.

The other allegation in the new report is that, at first, Eric Trump allegedly ran his foundation with a group of friends and really seemed to try to make sure his wealth was going to charity. Once the board was stacked with other Trump Foundation employees, things allegedly shifted so that the whirlpool of money reportedly stayed in the family's pockets.

Technically, none of the above-mentioned allegations are illegal. But whether or not the allegations about the money funneling are true, it's more than likely that the Forbes report is causing a major headache for the already beleaguered Trump administration. And at the moment, that's the last thing it needs.