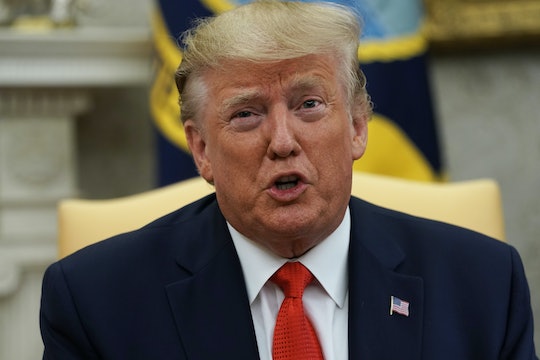 Did Trump Forget Barron Is His Son? Twitter Is Seriously Confused By This Odd Moment

I don't know about you guys, but I've become desensitized to the wild statements that spew out of President Donald Trump's mouth and Twitter feed on a regular basis. At this point my mindset is: Another day, another mind-blowing quote or tweet from Donald Trump. That doesn't make his rhetoric more acceptable by any means, of course, it's just how I cope with the ridiculousness of it all. As for the latest installment of what did he say? Prepare yourself, because Trump apparently forgot Barron is his son, a gaffe that has Twitter seriously confused.

On Wednesday, Sept. 11, Trump met with reporters to talk about vaping, and how he wants the Food and Drug Administration (FDA) to take flavored e-cigarette products off the market (which is actually a great idea given the recent string of vaping-related deaths). And to bolster his case, POTUS explained that it was his wife, First Lady Melania Trump, who got him involved in the issue. But in a strange turn of events, Trump made a confusing statement about Barron in the process.

“That’s how the first lady got involved. She’s got a son,” Trump said, before seeming to correct himself by adding, “together,” according to HuffPost. He went on to declare that Barron “is a beautiful young man," and that Melania "feels very, very strongly about it.” Um, what?

Naturally, Twitter didn't miss a beat, and many chimed in with their reactions to Trump seemingly forgetting that Barron is his son, too. One person tweeted, 'She’s got a son—together.' He forgot and had to catch himself. His frontal lobe is melting."

Yet another Twitter user wrote: "Trump on Tiffany: 'She studies so hard. She's a great student. And she's just a great — she's a great person. So I look forward to talking to her.'

Trump on Barron and Melania today: 'She's got a son — together — that's a beautiful young man.' These are his OWN kids btw."

In case you were wondering, Trump's quotes about Tiffany came at the end of August, after his former personal assistant, Madeleine Westerhout, allegedly made so-called inappropriate comments about his youngest daughter during an off-the-record dinner with journalists, according to Business Insider. Westerhout was reportedly fired after the incident, and Trump went on the record to express his admiration for Tiffany.

Trump and Westerhout did not immediately respond to Romper’s requests for comment regarding the incident.

Meanwhile, another Twitter user suggested that Trump might have Alzheimer's. Granted, there is no way to prove that Donald Trump actually has Alzheimers, but it's worth noting that his father, Fred Trump, reportedly battled Alzheimer's for six years before his death in 1999, according to The New York Times.

Of course, I don't doubt Trump loves Barron. POTUS has said wonderful things about his youngest before, and I'm sure this was just a simple case of miscommunication. But I can see how some might attribute this moment as a certain disconnect between Trump and Barron, as his comment was odd. But I'll let Twitter have the final word on that one.