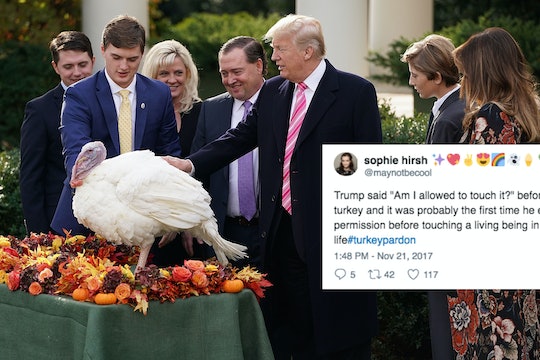 Trump Asked Permission To Touch One Of The Turkeys He Pardoned, & Twitter Is Roasting Him

Few people were surprised when President Donald Trump didn't immediately acclimate to his Oval Office duties, seeing as how he had absolutely no experience or knowledge of the job. However, the White House Thanksgiving tradition seemed to fit perfectly in his wheelhouse. While a more dignified politician might find the theatrics of interacting with a live animal beneath their station, Trump is a man who has willingly appeared in no fewer than six WrestleManias. Besides, how can you screw up pretending to spare the life of a bird? Here's how: Trump asked permission to touch the turkey before he pardoned it, and some people are wondering why he afforded more courtesy to poultry than he allegedly has to women.

Shocking everyone who thought that he believed he was entitled to literally everything, Trump asked the turkey's handlers, "Am I allowed to touch it?" and waited for confirmation before making contact with Drumstick, a bird he characterized as both "beautiful" and "magnificent." It's a stark contrast to his own description of how he treats "beautiful women," as told to Billy Bush in during his now-infamous 2005 Access Hollywood appearance. "I just start kissing them, Trump said at the time. "It's like a magnet. Just kiss. I don't even wait. And when you're a star, they let you do it. You can do anything." Encouraged by Bush, Trump then elaborated: "Grab them by the p*ssy. You can do anything."

Whether you agree with eating meat or not, it's kind of hard to understand why Trump would respect the autonomy of male birds, but not human women. This one's not going down easily.

Also, "I feel so good about myself"? What in the hell does that mean? Is he proud that he didn't grab it by the snood? What, exactly, did he do that's so commendable?

The Access Hollywood tape isn't the only evidence that Trump's treatment of women is worse than his treatment of ceremonial birds; he's been publicly accused of sexual assault by 13 women, according to the Washington Post. He has denied all of those accusations and has not returned Romper's request for comment. And, he continues to defend Senate hopeful Roy Moore against a slew of accusations of sexual contact with minors, up to to and including sexual assault. Moore has also denied all accusations and has not responded to Romper's request for comment.

Bird consent aside, there were plenty more jokes to be had at Trump's expense. For one thing, the pardon came right in the middle of his public feud with three college kids who Trump feels aren't showing him the proper gratitude for reportedly getting them released from a Chinese prison. He literally tweeted that he "should have left them in jail" because the father of one of them downplayed Trump's involvement in their release.

Trump also claimed, during his official remarks, that "the National Turkey Federation first presented the National Thanksgiving Turkey to President Harry Truman," who refused to pardon it. This, according to the Harry S. Truman Library & Museum, is categorically untrue. And if Trump is such an animal lover, why is he only the third president in U.S. history not to have any at the White House?

And women aren't the only Americans who feel like farm animals get more respect from the president than they do.

Trump tried to play it cool with some corny jokes, but they didn't land, either. He announced that though he's been "very active in overturning a number of executive actions by my predecessor," he wasn't able to revoke the ceremonial pardons granted by President Obama last Thanksgiving, "So, Tater and Tot, you can rest easy." Memo to Trump: not everyone finds your never-ending contempt for Obama cute.

Adn surely Drumstick was a step up after Trump's first pardon, Joe Arpaio, but we've got to wonder, who's next?