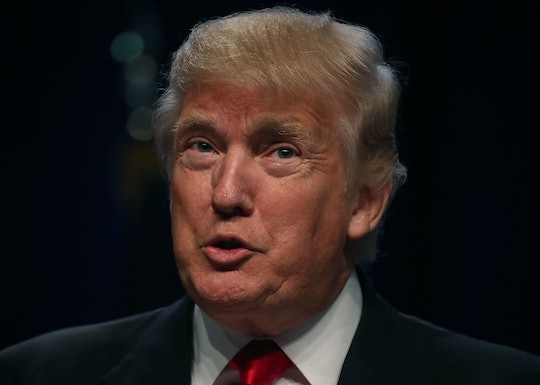 Trump Backs Birth Control Without Prescription, But That Could Decrease Access

A few days ahead of Donald Trump's Dr. Oz appearance Thursday, Trump announced he would reveal his medial history during the show. And then the campaign said he wouldn't. And then, on the show, he did — he brought with him a summary of his physical. But that's not the only surprise on the show that has people talking. When asked whether women should be reimbursed for their birth control, Trump advocated birth control without a prescription, according to CNN. "I would say it should not be a prescription; it should not be done by prescription," he said.

The statement seems to be conflicts with the GOP's platform, which is against over-the-counter contraceptives, according its website. And it doesn't quite fit with general Republican establishment sentiments that promote restricting access to contraceptives for women. But Trump's ideas about birth control might be more aligned with GOP views than they sound.

Currently, there are three states — Oregon, California, and Washington — that allow hormonal contraceptives to be sold without a prescription from a doctor. Oregon and California, whose laws came into effect this year, allow pharmacists to prescribe and sell birth control directly to women, according to the LA Times. Washington, whose law was passed all the way back in 1979, allows pharmacists to prescribe and sell birth control if they're working in a "collaborative agreement" with a doctor, according to the Washington State Pharmacy Association. Washington, D.C. has a similar law that allows women to get birth control without a prescription. In all cases, there is no age minimum required to get the birth control.

But there's one key difference between the laws passed in these states and D.C. and the laws that would be required to support Trump's idea. The aforementioned laws don't say anything about birth control that is prescribed by a doctor, meaning that they are still allowed. In these places, access to birth control has simply expanded because of the additional option now available to purchase contraceptives over the counter. But Trump's idea is fundamentally different in that he doesn't think that prescriptions for contraceptives should be written by doctors at all.

That means that birth control would be done entirely through pharmacies, or other non-health focused businesses. Planned Parenthood and other nonprofit organizations have said that if all contraceptives were sold over the counter, it's very likely that insurance wouldn't cover it. So women would be forced to pay out of pocket for contraceptives that are now fully covered under the Affordable Care Act. That could be hundreds of dollars per year.

So while it may seem at odds with the GOP's views on birth control, Trump's idea actually kind of supports it by increasing the cost of birth control — and thereby decreasing access to it.