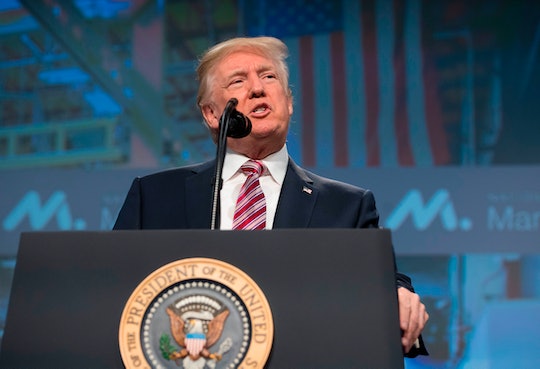 Another day, another absurd Trump quote. On Friday, President Donald Trump said disaster relief efforts in Puerto Rico are complex because the island is “surrounded by water.” Which is, of course, true. But he went on to say, according to The Hill:

This is an island, surrounded by water. Big water. Ocean water.

It was quite the elementary description of the issue that is getting relief and aid to Puerto Rico, to say the least. Now, a bunch of Trump "big water" memes and jokes are making the rounds on social media, showing that his description of Puerto Rico in this instance was kind of ridiculous.

The comments Trump made were possibly a response to criticism for the way his administration has responded to Hurricane Maria and the devastation left in its wake — even from members of his own political party like Sen. Marco Rubio, according to The Hill. Puerto Rico is facing a humanitarian crisis as a result of the damage from the storm, which swept through the Caribbean island last week, according to Business Insider.

Other islands in the Caribbean took devastating hits from the storm as well, according to The Weather Channel. The island of Dominica was heavily damaged by the storm, and Maria also left ruin in its wake in Guadeloupe and the United States Virgin Islands. But it's Puerto Rico and the administration's response to the damage there that has prompted criticism, and led to Trump's comments on Friday, which quickly inspired responses from Twitter.

Though Trump sounded pretty serious in the video clip that's making the rounds, his words were not exactly befitting of the dire nature of the situation in Puerto Rico. "Big water" is about as simplistic as you can get when describing an ocean, after all.

"Did he think we were confused and thought it was bath water?," @romanticskeptc tweeted, "Speak like an adult!" And that sort of response to Trump's "big water" comments were not uncommon — a lot of people found the description Trump offered to be pretty juvenile.

Even big names got in on the reaction to Trump's comments. Filmmaker Michael Moore tweeted, "The water is SO big!And, my god, it's OCEAN water. How will we ever get there?!," mocking the simple and silly description Trump chose for an island where millions remain without electricity and water, and where 16 people have already died as a result of Hurricane Maria, according to CNN.

Also, what exactly does "big water" mean when it comes to getting the people of Puerto Rico aid? Yes, the fact that it's an island in the Caribbean does complicate matters, but the island isn't exactly in the middle of nowhere. It's not even as out in the middle of "ocean water" as, say, Hawaii, as Shannon Watts — the founder of Moms Demand Action for Gun Sense in America — pointed out in a tweet.

As others noted, crossing "big water" hasn't been an issue for other significant challenges the U.S. has faced in the past. In jest, @SpinDr tweeted, "How did the U.S. ever win WWII? Many have said that you had to cross very wet and big water, even ocean water, to get to Germany & Japan."

As a joke in response to Trump's "big water" quote, one person tweeted a photo of their child, in a lifejacket and on a boat, seemingly looking out over the water the boat is in. The tweet read, "'Daddy what is that?' Me: 'that's big water, ocean water,'" clearly mocking Trump's description of where Puerto Rico is located.

For the most part, people poked fun at how simplistic Trump's description of the ocean surrounding the island is.

Because it's better to laugh than to sit in disbelief that the supposed leader of the free world is saying these things, I suppose.

But the truth is, this is no laughing matter. Puerto Rico and its people need help now, as do the people of other regions devastated by Hurricane Maria, like the USVI. Thankfully, there are a ton of resources if you're looking to help hurricane victims in Puerto Rico — organizations that have apparently figured out how to get past this whole "big water" dilemma.