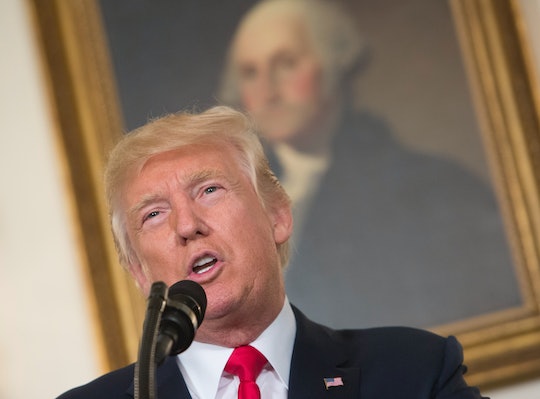 Just a day after amending his initial statement on the violent white supremacist rally on Saturday, President Donald Trump blamed the "alt-left" for the Charlottesville violence, blaming "both sides" of the protest, which shocked even more people. On Saturday, he was criticized for originally insisting that there were "many sides" to the white nationalist gathering, only to later denounce the groups that organized the rally on Monday. His most recent remarks appear to be a return to his original position, blaming counter-protestors for the violence perpetrated by white supremacist organizations.

At a press conference that was originally meant to be about infrastructure, Trump was asked about his original statement on Saturday. He said that he wanted to have "all the facts" before coming out and denouncing white supremacists outright. As reported by The Daily Beast, Trump said of Saturday's violence:

He added, "What about the 'alt-left' that came charging at the, as you say, the 'alt-right'? Do they have any semblance of guilt?" Though there is no evidence that the "alt-left" instigated any violence, as ThinkProgress reported.

The "alt-right" is a self-described group of various white nationalist, KKK and Nazi-sympathizing groups that has gained support in the past few years, though they attempt to pass themselves off as mainstream conservatives or "protectors" of American heritage.

It's not clear what Trump means by the "alt-left," since it's often just him and Fox News pundits that use it. He likely means "Antifa," or anti-fascist groups that were there in Charlottesville protesting the "Unite the Right" rally, but again, it's unclear.

Trump returning to the "many sides" defense is worrisome, since the rally was initially planned to protest Charlottesville removing a statue of Gen. Robert E. Lee from Emancipation Park. The city removed the statue in the name of no longer honoring a man who fought for slavery and lost. There are not "many sides" or levels of being racist and anti-semitic, and an American president shouldn't waver in his denunciation of the groups, some of which are his supporters and are encouraged by his ambivalence.

There is just one side to denounce, such as the various hate groups that took over the University of Virginia's campus with torches on Friday night, invoking the KKK and chanting that they, white people, would "not be replaced by Jews." That's the one side that needs to be denounced and stopped. It's not complicated.

After Virginia Gov. Terry McAuliffe declared a state of emergency on Saturday morning, white supremacists clashed with counter protestors; One of them, later identified as Heather Heyer, was murdered when a man drove a car into her group.

The longer Trump insists on being vague about where he stands and disavowing white supremacists, the more emboldened those groups of racists become. There are almost a dozen white nationalist and supremacist rallies planned for the upcoming week alone. Hopefully, Trump will soon take a leadership role and put an end to them, before more violence ensues.