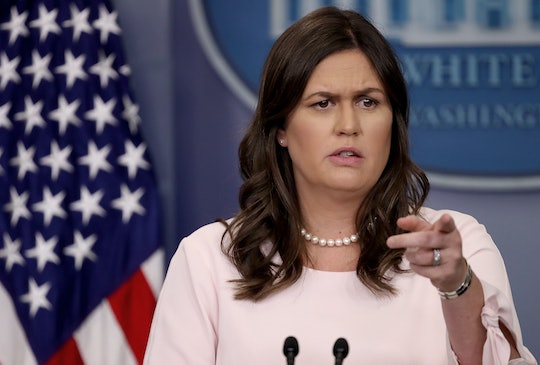 Trump Called Out The Red Hen For Not Serving Sarah Huckabee Sanders, & Twitter Is Pissed

On Friday, White House press secretary Sarah Huckabee Sanders took to Twitter to write that the owner of a restaurant in Lexington, Virginia, had asked her to leave specifically because she works for the Trump administration. Sanders wrote that she "politely left," and that she does "[her] best to treat people, including those [she disagrees] with, respectfully," which immediately sparked a heated debate on social media, But now, it looks like the president himself has weighed in: on Monday, Trump called out the Red Hen for not serving Sarah Huckabee Sanders, and while it has certainly added fuel to the argument over whether or not it was fair to ask her to leave, some are calling Trump's decision to call out a private business entirely unethical, and quite possibly a deflection technique.

Sanders' original tweet quickly led to the kind of reaction we'd all expect at this point: her supporters swiftly condemned the restaurant owner's request, while her critics praised it. But there's also much more to it than that — particularly because the incident took place a little over two weeks after the Supreme Court ruled that a Colorado baker was within his legal right to refuse to bake a wedding cake for a gay couple. Conservatives, by and large, have argued that liberals have no right to support the restaurant owner when they previously argued the baker had no right to turn the couple away, while liberals have mostly argued that, since she's a government official supportive of discriminatory policies, Sanders was basically just getting what she deserved. But the fact that the POTUS has now weighed in on the matter — he called the restaurant "filthy" and Sanders "a fine person" — appears to raise a whole new set of questions about what should and shouldn't be fair game.

In an interview with The Washington Post, Red Hen co-owner Stephanie Wilkinson said that though she's "not a huge fan of confrontation," and while she obviously wants her business "to thrive," she ultimately decided to ask Sanders and the group she was dining with to leave after she spoke with members of her restaurant staff. Wilkinson said that the way Sanders has defended some of Trump's highly-controversial plans — like banning transgender people from the military, and separating immigrant families at the border — led them to agree that asking her to leave was the right thing to do, and that it ultimately felt like "the moment in our democracy when people have to make uncomfortable actions and decisions to uphold their morals."

That clearly didn't sit well with many people on social media though, who argued that it was hypocritical for anyone to praise Wilkinson's actions if they also expressed outrage over the notion that private business owners could refuse orders based on religious beliefs.

Yet many on the other side of the argument insisted that it wasn't even sort of the same thing. For one, Sanders is an elected official, not a private citizen. And she wasn't being discriminated against for her sexual orientation, she was being asked to leave because she supported policies that discriminated against people because of their sexual orientation — and their gender, and their race, and their immigration status.

And, of course, the "Colorado baker" argument also works in reverse: although conservatives supported the baker's rights to turn down the same-sex couple, they condemned the Red Hen owners:

Yet, given Sanders' position in the Trump administration, her tweet also raises ethical concerns. For one, should she be able to send out such a tweet using an official White House Twitter account? And by the same logic, what does it mean when Trump — the President of the United States — uses his Twitter account to publicly criticize a private small business?

In a reply to Sanders' tweet, Water Shaub, former head of the U.S. Office of Government Ethics, wrote that using her White House twitter account in that way was "a clear violation of 5 CFR 2635.702(a)," which, according to The Huffington Post, "prohibits government employees from using their position for personal gain or for endorsing a product or business," which would also include doing the opposite and "discouraging patronage." Trump's account, of course, is a bit of a gray area, since it was his private account long before becoming POTUS. But since Trump's tweets are now subject to federal record keeping, according to NPR, it doesn't exactly seem unreasonable to expect that the president shouldn't be calling out the Red Hen for being dirty — after all not only is it unclear whether the president has ever actually eaten there, but the restaurant passed its most recent health inspection in February with no violations whatsoever, according to NBC News.

As easy as it may be to get caught up in the debate over Sanders though, much like the backlash over First Lady Melania Trump's infamous Zara jacket, it seems like, perhaps the amount of attention we're giving to these incidents is also missing the point. After all, whether or not the press secretary should be allowed to be kicked out of a restaurant, or whether she should be allowed to tweet about it afterwards, should really been secondary to the much bigger issues at play in the country at the moment.

Although having to leave a restaurant might have been embarrassing or inconvenient for Sanders and those she was dining with, the reality is that, for far too many people in America right now, political differences are actually putting their safety in jeopardy. And that's something that shouldn't be forgotten — and certainly not simply because of a tweet from the president.