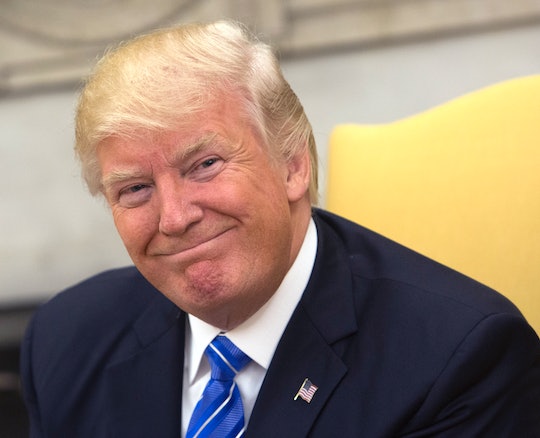 Can You Figure Out What "Covfefe" Means?

We all make mistakes. That's why we have erasers, backspace keys, and laser tattoo removal. But how we react to those mistakes matters, which is why the public is more than a little puzzled after Trump challenged people to "figure out the true meaning of 'covfefe'," a hopelessly misspelled word in an incoherent and incomplete tweet that he accidentally left up overnight. Not only is he not admitting that he made a mistake, he's apparently covering it up by pretending that it's some sort of riddle or scavenger hunt. The White House did not immediately respond to Romper's request for comment.

Just after midnight Eastern Time on Wednesday morning, Trump tweeted "Despite the constant negative press covfefe," and while he slept, the internet had a field day. About six hours later, he deleted the tweet, which should have been the end of the whole debacle. Surely nobody was expecting a press release explaining that the president had accidentally sent the tweet after staying up too late watching Fox News, or that his fingers were simply too short to properly operate the virtual keyboard on his five-year-old Samsung Galaxy, but simply ignoring the the tweet or blaming it on an unnamed intern would have been acceptable. Instead, Trump replaced it with an extra-credit question:

First of all, we're already enjoying "covfefe" very much, thank you. Merriam-Webster‏ is trolling the president once again, there are some amazing GIFs being created, and two new Twitter personalities — a Viking and a wizard, it appears — are locked in a heated debate over which of them has been summoned by the magic word. Other than the houses divided over how to pronounce "covfefe" (it's "cov-FEE-fee," and if you disagree you can go to hell) everybody seems to be enjoying the new word bigly. It might go down in history as Trump's greatest legacy. But that's beside the point.

Trump's follow-up tweet seems to imply either that he's in on the joke, or that there is an actual definition for "covfefe" (there are 164 on Urban Dictionary as of 10:00 a.m. ET, but that's not exactly a trustworthy source). The most likely explanation, of course, is that he started to tweet about press coverage, committed an egregious typo, and then... got distracted? Fell asleep? Pocketed his phone and then butt-tweeted? We may never know, but it appears to be a simple mistake that's now been blown completely out of proportion, as well as highlighted the very real need for a full-time White House team charged with monitoring the president's Twitter feed (certainly most major news outlets have one by now).

It also speaks to a pattern of behavior; Trump has repeatedly refused to own up to his mistakes. Take, for example, how he dismissed a recording of himself bragging about committing sexual assault as "locker room talk," his repeated insistence that the media somehow faked photos showing the small size of his inauguration crowd, or his baseless allegations that former President Barack Obama wiretapped his phones. Trump does not admit to being wrong, whether the wrongdoing was accidental or deliberate. Acknowledging one's flaws requires integrity and courage, both important qualities in a leader. Trump's "covfefe" tweet creates the impression that he lacks both.