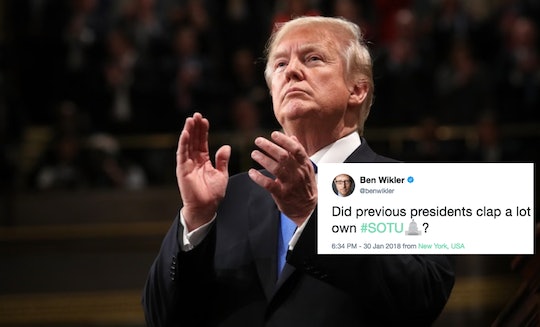 Trump Clapped For Himself At The State Of The Union, & Twitter Could Not Handle It

Tuesday night marked President Donald Trump's first official State of the Union address since taking office last January. Trump's speech was obviously a prime time for analysts and journalists to dissect his every word, but then something happened that made the world seem as if time had stopped. Yep, Trump clapped for himself at the State of the Union and Twitter couldn't handle it. But really, is anyone actually surprised?

I mean, come on. We're talking about a man who loves to talk about his huuuge approval rating and loves to continue to bring up his election victory (despite the fact that ya know, more people actually voted for Hillary Clinton). So the fact that he continually clapped for himself during his speech isn't really all that newsworthy. But you know what is newsworthy? The fact that Trump clapping for himself has so many Twitter users talking about it.

Obviously, the nation is pretty divided right now, and while one of Trump's main points in his speech was that he wanted to bring everyone together, he probably wasn't planning on that happening by internet users making fun of him. But sometimes, life comes at ya fast. And you just have to keep clapping, I guess.

Most People Were Just Amazed That Trump *Actually* Applauded Himself

I mean, I don't know how Trump was raised, but my momma taught me to be humble, kind of how Kendrick Lamar says to be. Clearly, though, Trump was not taught the same thing, as he legitimately wouldn't stop clapping for himself during his speech.

I mean, I guess it's OK to be proud of yourself for your accomplishments, but the State of the Union isn't really meant to be a time to brag. It's supposed to be about informing the public where the nation currently stands, and what the administration's goals are for the next year.

Oh, And Not Only Did Trump Clap For Himself, He Did It In The Microphone

Like, he seriously just kept clapping into his microphone without realizing how loud and obnoxious it was. Because of course he did.

Really, Though, There Was Just Too Much Clapping

Obviously, clapping for himself isn't the worst thing Trump has done, but at a time when the nation is so hurt and divided, being able to make light of something like it kind of makes everything seem a little less awful, you know?

And really, when Trump has been caught on microphone bragging about grabbing women inappropriately, and was still elected, why should people stop being concerned for how he behaves? Spoiler alert: you should never stop being concerned for the way the president talks about women. Ever. And even though Tuesday night's State of the Union wasn't even about that, it's still OK to talk about it, and to talk about other flubs Trump has made.

Because Really, How *Fitting* Is It That Trump Clapped For Himself?

Really, though, the State of the Union isn't about what the president does or how strangely he behaves. At the end of the day, it's about politics, policies, and what the American people deserve to know about the state of their nation. And as funny as it is that Trump spent so much time clapping for himself, as Business Insider reports, that's actually pretty normal. Well, sort of.

Senators, congressmen, party leaders, guests, and both the president and vice president will spend a significant portion of the speech clapping after the president delivers lines.

Yeah, usually, other people clap for the president and he just kind of accepts the applause. But Trump isn't a usual president, and so his clapping for himself might just be the new precedent for the State of the Union.