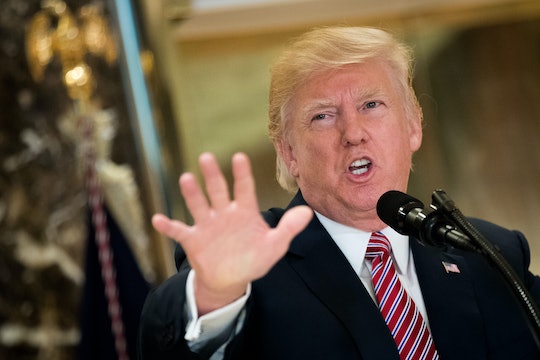 During his near-daily breakfast Twitter rant on Thursday, President Donald Trump chose to double down on his comparison of Robert E. Lee to George Washington. But when Trump defends Confederate monuments, he misses the point. True, Lee and Washington were both Generals who fought on American soil. But Washington fought for the United States of America, while Lee fought against it. The full screed: "Sad to see the history and culture of our great country being ripped apart with the removal of our beautiful statues and monuments. You ... can't change history, but you can learn from it. Robert E Lee, Stonewall Jackson - who's next, Washington, Jefferson? So foolish! Also ... the beauty that is being taken out of our cities, towns and parks will be greatly missed and never able to be comparably replaced!"

Trump's statement that "you can't change history" is accurate, but removing statues is not an attempt change history; it's changing the way we remember it. Erecting monuments to men who committed atrocities fueled by hate glorifies them as heroes. Germany will never forget Hitler, but there are no monuments to him on public land. In the United States, however, over 700 monuments to the Confederacy still stand, according to FiveThirtyEight.

Trump's tweets echo his statements to the press on Tuesday, when he characterized white supremacists and Neo-Nazis as "very fine people" who were "protesting very quietly" when "the left, that came, violently attacking the other group." These innocent people, he claimed, were innocently objecting to the removal of a statue of Lee in Charlottesville, Virginia. According to NPR, Trump pondered, "I wonder, is it George Washington next week and is it Thomas Jefferson the week after? You know, you really do have to ask yourself, where does it stop?" This slippery slope fallacy also appeared in an email Trump's attorney, John Dowd, sent to journalists on Wednesday morning. The New York Times reported that the email claimed that there is "literally is no difference between" Lee and Washington, because "both saved America."

Once you've recovered from that ridiculous characterization, consider the fact that Lee was actually opposed to erecting Civil War memorials, writing in an 1869 letter, "I think it wiser, moreover, not to keep open the sores of war but to follow the examples of those nations who endeavored to obliterate the marks of civil strife, to commit to oblivion the feelings engendered." Why would Lee want to be reminded of a war in which he was outmanned and outmaneuvered from start to finish, leading hundreds thousands of his soldiers to their deaths before ultimately surrendering?

Lee apologists claim that the Confederate general wasn't fighting for slavery, but the fact is that he did indeed enslave and brutally torture black people. In an 1856 letter excerpted by The Atlantic, Lee defended this practice: "The blacks are immeasurably better off here than in Africa, morally, socially & physically. The painful discipline they are undergoing, is necessary for their instruction as a race, & I hope will prepare & lead them to better things." Lee wasn't a hero; he was a traitor. He led men to their deaths fighting against the United States in defense of slavery. His president wasn't Abraham Lincoln, it was Jefferson Davis. Even his great-great-grandchildren agree that monuments to him belong in museums, not on public land, according to Newsweek.

As for the "beauty" of Lee's statues being irreplaceable, there's no need to worry; the people of Baltimore already have that covered:

This is how Lee should be remembered: defeated by the proud, diverse citizens of the United States of America.