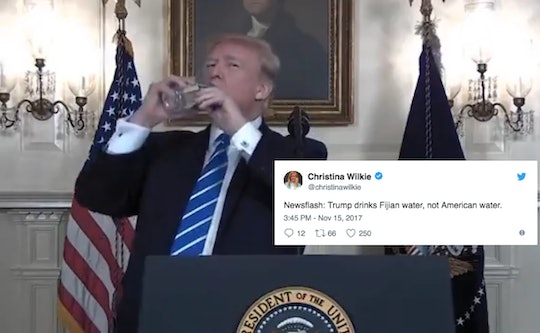 You're really going to have to see this to fully appreciate it, but a wonderful thing happened on Wednesday afternoon: President Donald Trump drank water in the most awkward way during a speech, and it's all anyone on Twitter can talk about. Awkward water sips, they're totally a thing. To be clear, there's nothing inherently wrong with drinking water. All Earth-based life forms need it! And while pausing for a sip can slow down the pace of a speech, it's perfectly understandable. That being said, there's a normal, human way to do so, and then there's what Trump did. It was bad. It was so bad, guys.

There he was, blathering on about jobs and Asia and money, blah blah blah, when he suddenly ducked behind his podium and popped back up again. "They don't have water; that's OK," he said, punctuated by a series of dramatic hand gestures. It should be noted that he was speaking at the White House, his home and place of employment, so the use of the word "they" in itself was a bit odd. Someone off-camera presumably told him that "they" did, indeed, have water, just to his left. And honey, that's when the real awkwardness began.

After retrieving a bottle of Fiji water from the floor, Trump proudly lifted his chin and began to open it, then quickly repositioned it because... It was blocking his tie? I don't know. But it was very intentional and very weird. He then employed a double-twisting motion to unscrew the cap, as if he'd never opened a bottle in his life.

And there's more! Holding the bottle in both hands, Trump eyed it, hesitated, and then, rather than bringing the bottle to his mouth, brought his mouth to the bottle, puckered, and tipped in a tiny sip. I could watch it all day. Join me?

In case you've forgotten, the original king of the awkward water break was Florida Sen. Marco Rubio, who got a little parched during his televised response to President Obama's 2013 State of the Union address.

Trump mercilessly trolled Rubio over it during his presidential campaign, even going so far as to mail him a case of bottled water in 2015.

Some Trump supporters (and maybe people who just haven't watched the video) are questioning why this is news, and I'll tell you: because it was super freaking weird! Not because there's anything wrong with thirst, not even because he mocked Rubio for the same thing, but because he opened and drank that water like an alien that's trying to imitate human behavior, but his only study guide was 1950s cartoons! That's not how anyone drinks water, you guys!

Oh, buddy, you know that's coming. It's got electrolytes! (Side note, if you still haven't seen Mike Judge's 2006 cult classic Idiocracy, please stop what you're doing and stream it right now.)

Why does he pucker like that? Does he normally only drink out of straws or sippy cups?

Hats off to this guy for actually listening to one of Trump's speeches. I prefer to read the transcripts, because it's much easier to tolerate the way he talks so much but says so little when I don't have to see or hear him.

And yes, there are people speculating on what made him thirsty, naming every controlled substance you can think of, but again, it's not about the fact that he drank the water, it's about how every single decision he made throughout the drinking process was just ridiculous.

Ah, the hands again. Gotta get that one in, I suppose. Anyone else?