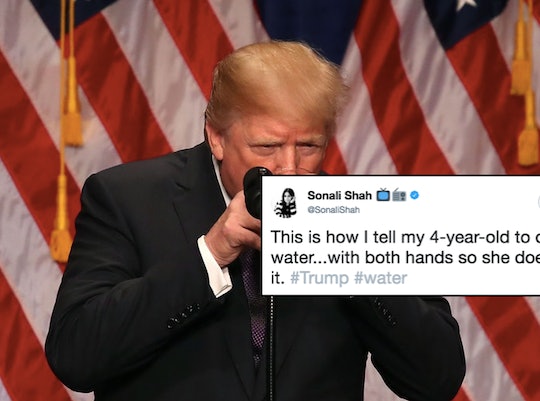 Look, there's a lot of bad stuff going on in the world right now. So sometimes you need to take a break from freaking out about the tax bill, and do a deep dive into the commander-in-chief's water-drinking habits. That's right, President Donald Trump drank water like a child again and Twitter is all over it.

On Monday, Trump gave a big speech on national security. What did he say? Who knows! Perhaps it was a lot of nonsensical babble about how great he is. Perhaps it was something with terrifying and wide-ranging consequences for the future of our nation. (Actually, not to take away from Trump's literal Watergate, but the speech was a little bit of both, and probably worth checking out, because this man is the president, and his words matter.)

Anyway, as luck would have it, the president got a little thirsty, and had to stop for a water break part of the way through his big, important speech. Did Trump reach for a glass with one hand like a normal adult? Nope. He used both hands, like, as some on Twitter described, a toddler navigating his first sippy cup.

And just like that, Twitter went wild. Trump's speech about America's foreign policy may have been scary, but Trump's water drinking was the 2017-appropriate version of Christmas come early. It seemed that everyone had something to say about it.

First, it's important to take a watch of the moment, in all of its glory:

Some Pointed Out How Weirdly... Young It Made Him Seem

Hey, there is a persistent rumor that Trump has tiny hands. So perhaps it makes sense that he took that sip of water with two hands and some assumed parents made a humorous connection.

Meanwhile, Some Wanted Justice For Marco

Ah, remember how back during the primary campaign (those halcyon days when many people thought there was no freaking way that Trump would ever get his party's nomination, let alone win the general election), Trump repeatedly insulted Florida Sen. Marco Rubio for taking a big sip of bottled water during his response to President Barack Obama's State of the Union address? At one rally, Trump splashed around a bottle of water while shouting, "It's Rubio!" At another point, according to MSNBC, Trump reportedly sent Rubio a bunch of water bottles with Trump's face on them and a note reading, "Since you’re always sweating, we thought you could use some water."

Turns out that those who live in glass houses shouldn't throw stones, and those who drink water like a child shouldn't make fun of other unique water drinkers.

Trump had another strange, viral water-drinking moment back in November, when he stopped a speech to look for water and then took a quick two-handled gulp from a bottle. Rubio managed to get a bit of his own back then, tweeting out this perfect response:

I eagerly await Rubio's tweet on this latest water-drinking incident. In the meantime, let's move on to more perfect Twitter reactions!

Others Had Animals And Other Creatures On The Brain

Top-notch parody account NOT A WOLF found a bit of sympathy for the mocked president:

By the end of the speech, Trump managed to drink water in a more normal way, with only one hand, and then delivered a ringing endorsement of it by saying, "Really good!" Needless to say, this was also documented on Twitter, appearing alongside the perfect chyron for the moment, reading, "Trump: 'America Is Coming Back Strong.'"

Sure, there may be more important things going on in the world. But right about now, you've got to find joy where you can get it, right?