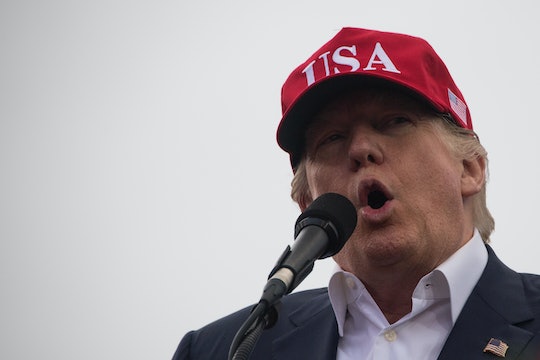 On Saturday evening, President-elect Donald Trump said China should keep the American drone it captured from international waters, fanning the fires of an already contentious political situation. The Tweet came after U.S. officials came to an agreement with China to secure the return of a research drone that had been seized by a Chinese warship on Thursday, which led the Pentagon to demand its return on Friday. Trump, however, seemed to disagree with that approach, instead suggesting on Twitter: "We should tell China that we don't want the drone they stole back. Let them keep it!"

It wasn't the first Tweet Trump issued in response to the drone's seizure. Earlier on Saturday, before news emerged that the two countries had reached an agreement to ensure the drone's return, Trump tweeted, "China steals United States Navy research drone in international waters — rips it out of water and takes it to China in unprecedented act."

Chinese officials have not responded to Trump's most recent comment, but in a statement on Saturday confirming plans for the drone's safe return, China accused the United States of "hyping up" the incident. "China decided to return [the drone] to the U.S. side in an appropriate manner, and China and the U.S. have all along been in communication about it," the Chinese defense ministry said on its website, according to Reuters. "During this process, the U.S. side's unilateral and open hyping up is inappropriate, and is not beneficial to the smooth resolution of this issue. We express regret at this."

This isn't the first inflammatory comment Trump has made regarding China. According to The Guardian, in recent weeks, Trump has accused the country of manipulating its currency, militarizing the South China Sea, and heavily taxing American products. He also suggested that it was up to China to deal with North Korea's testing of a hydrogen bomb, and drew intense criticism when he spoke directly with the president of Taiwan, straying from the United States' typical "One China" policy (in which it recognizes Taiwan as part of China, rather than as its own state).

During a press conference on Friday, President Barack Obama warned that the United States' relationship with China was incredibly important when it came to the economy, security, and international affairs. "There is probably no bilateral relationship that carries more significance," he said, according to The Guardian. "There is also the potential – if that relationship breaks down or goes into a full conflict mode – that everybody is worse off."

Regardless of the president-elect's most recent drone Tweet, it seems China will be returning the research drone to the United States. However, there's been no word from China yet regarding Trump's latest outburst. Chances are, it won't help ease recent tensions between the two countries.