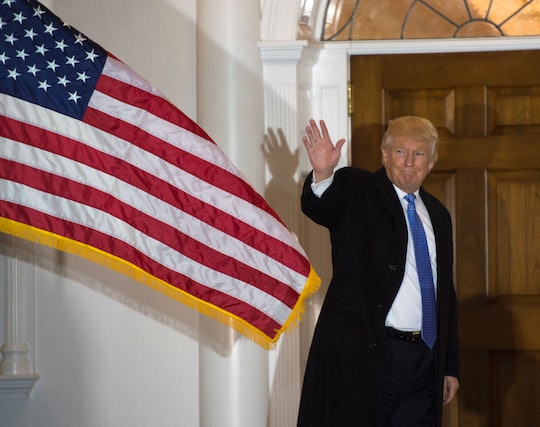 Trump Has Reportedly Been Turning Down Intelligence Briefings & It's Highly Concerning

President-elect Donald Trump ran on the fact that he is not a politician and doesn't know the inner workings of government, which sounded refreshing to some voters. That's fine, but it's a little troublesome that, since being elected, Donald Trump has reportedly been turning down intelligence briefings in this transition period. Once elected, Trump was privy to national security briefings — the same ones the president gets — so that come Inauguration Day, he would be up to speed and prepared to make decisions about anything that comes his way, just like a president is supposed to do.

But Trump has only received two such briefings, according to The Washington Post. That is much lower than any of his predecessors. He had a briefing just before his election and one just afterward. It's a little troubling, since national security is a top concern for the president-elect (as it is to every American), that he would refuse briefings. On the (somewhat) bright side is the fact that Indiana Gov. Mike Pence, the vice-president elect, has been making time each day to sit down with experts and get the rundown. So at least someone in power is paying attention.

The briefing, called the President’s Daily Brief is a classified document that's basically an outline of information gathered from the 16 intelligence agencies, CIA programs, and other intelligence. It likely has information on Russia, Syria, and other aspects of foreign policy that the president-elect said were some of his main priorities. Big things happen over time, which is why daily briefings are necessary to keep up.

One senior official at the White House told The Washington Post, that Trump has a "lot of catching up to do." That's consistent with what national security intelligence officials said after his first two briefings.

In comparison, President Obama was eager to get the briefs during his transition He also, as voters might remember, did not have a lot of foreign policy or security experience. (That being said, once in office, Obama did skip some briefings, too.)

The president (and president-elect) can always read the briefing if they don't make a whole meeting out of it. But for someone like Trump, who has no experience with this sort of job, it makes sense to want to get a lay of the land before he sits down in the Oval Office or the Situation Room. Others don't think it's a huge problem.

“His pace is not as frequent as most recent presidents-elect, but it is not unprecedented over the decades-long scope of these briefings,” said David Priess, a former CIA officer and briefer during the George W. Bush administration.

California Rep. Devin Nunes, who is on the Trump transition team and also the chairman of the House Intelligence Committee, isn't worried. He said, "National security is Donald Trump’s No. 1 priority and I think he’s taking it very seriously. Look how many leaders he’s met with, how many phone calls he’s done, positions he’s filled. People who are being critical need to get a life.”

But meeting with foreign leaders, taking calls, and vetting people for the Cabinet is just part of the job. Knowing what's going on around the world is necessary as Commander in Chief.

Who knows why Trump is avoiding them. It could be that he plans to delegate decision making in that sphere to Pence and his other advisors. But some of the people he's nominated so far don't have experience in foreign affairs, either. It seems foolish to turn information away, especially since knowing what's going on around the globe, and specifically what American forces ad agencies are up to, is a fundamental part of the job.

Sure, this is all new to Trump. But just like going to class all the time in college helps you out when final exams roll around, sitting in on these briefings could fill in some of Trump's blanks when it comes to overseas dealings. Or he could at least nominate people who know what they're doing and have the time to listen to the experts.