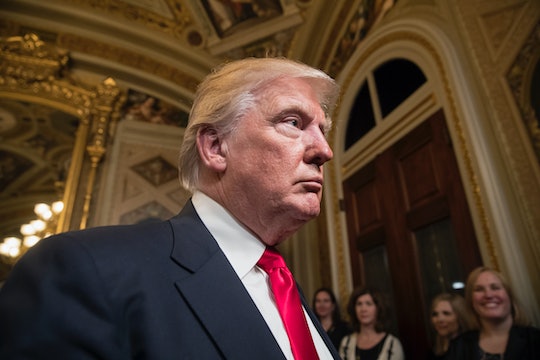 Trump Has United People In An Unexpected Way

During his inaugural speech, President Trump spoke about Americans uniting and coming together to create change under his leadership. Surprisingly, that was one point where he was 100 percent correct, and it's one of the few things I've come to appreciate since he snagged the primary election last year. Because Trump has united people, although it's in a way that he probably never expected: in a country often plagued by complacency, he's united people in protest. People are putting their money and time behind causes they believe in, and they're learning to speak up among friends, instead of staying silent to preserve the peace. Trump has brought people together to create change in a way that the United States hasn't seen in a while.

As a spokesperson told The New York Times, the National Park Service has received at least four times the typical amount of protest permit requests this election cycle, compared to elections past. And that's not surprising: the Women's March on Washington is expected to draw at least 200,000 protestors on Saturday, while groups like Inaugurate the Resistance and #J20 Resist said they were expecting 15,000 attendees combined. 20,000 people RSVP'ed to Friday's #NotMyPresident protest on Facebook. According to The New York Times, the last time the country saw comparable numbers at a presidential inauguration was for President Nixon's second inauguration.

Trump's election has also spurred people to support organizations whose causes they believe in. After the election, the American Civil Liberties Union had a 7,000 percent increase in visitors to its website, and its donations page actually crashed. In five days, it received $7.2 million in donations, according to The Atlantic. The Council on American-Islamic Relations said it had received an "unprecedented" amount of volunteer applications after Trump proposed banning Muslims from the country, and the Sierra Club came close to quadrupling its monthly donation record. Planned Parenthood, as many know, received over 82,000 donations in Vice-President Mike Pence's name alone.

This may have been a divisive and eye-opening election — but Trump's views on healthcare, immigration, and reproductive rights have encouraged people who have never before protested in their lives to show up to marches. People are reaching for their wallets in order to protect their values. And whether online or in person, they've made it a priority to show vulnerable communities that they have allies who care about them. That's the kind of attitude of civic engagement and activism that North America could use all the time — and hopefully, regardless of what happens under a Trump's administration, it's an attitude that the United States will continue to foster.