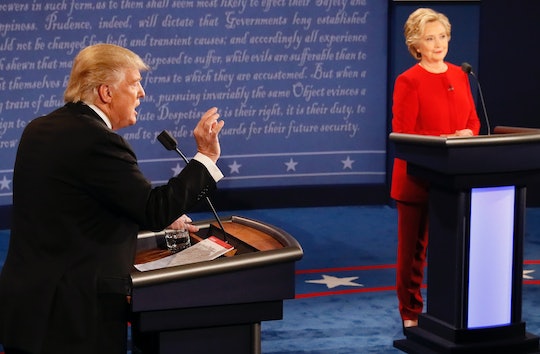 Trump Interrupted Clinton 51 Times During The Debate, Which Comes As No Surprise

A presidential debate is essentially a controlled argument, and a fair amount of interrupting and condescension is to be expected. But adding up every interjection shows that Donald Trump interrupted Hillary Clinton 51 times during the debate, fully three times as much as she interrupted him, according to Vox. This figure won't come as a shock to most women, of course, since it's a profoundly common experience. Whether discussing the latest Marvel movie at a party or vying for the presidency of the United States, women are going to be interrupted by men.

The paper trail goes back to 1975, when sociologists Don Zimmerman and Candace West published their now-infamous study in which men were responsible for all but one of 48 interruptions that they observed, and further studies have shown that women are much more likely to be interrupted than men. The agreed-upon theory is that men tend to interrupt to display dominance in conversation, which absolutely makes sense within the context of a political debate, but it's more than a little preposterous to see a real estate developer and former reality TV star trying to mansplain foreign policy to the former Secretary of State. And while Clinton's interruptions were fact-checks, Trump's were primarily aimed at disrupting and undermining Clinton with phrases like "No" or "Nope."

Many of Trumps's interruptions of Clinton were insubstantial; according to an NPR transcript, on five occasions he simply interjected, "Wrong." More than a few were snide retorts, such as when he responded to Clinton's accusation that he "rooted for the housing crisis" with, "That's called business, by the way," or when she pointed out his failure to pay federal income taxes with, "That makes me smart." When Trump did have more than a few words to contribute, he barreled over the ends of Clinton's remarks, haranguing and outlasting her. He seemed to focus less on actual discourse and more on attempting to rattle Clinton and gain the upper hand.

This is far from the first time in Clinton's career that she's been faced with sexist condescension. During a 2000 Senate debate, Rick Lazio famously approached her podium and refused to leave her space, a move many felt was overly aggressive. Her varied responses to Trump's heckling on Monday night included grace, derision, and humor, and Clinton's been deemed the winner of the debate by all metrics other than a few unscientific online polls hosted by extreme-right websites, showing that she won't be dominated by any man, least of all Trump.