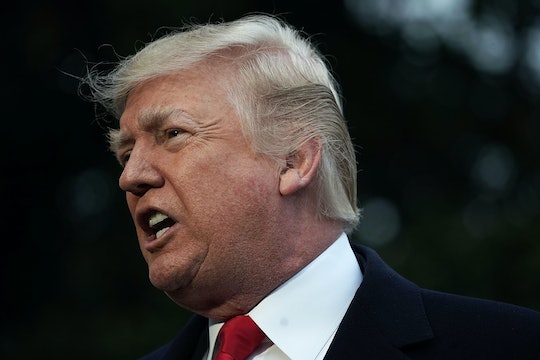 Ever since Donald Trump took office, it seems like it's been once controversy after another. Granted, I'm not at all surprised. Nevertheless, I wake up in the morning almost afraid to check the news on my phone, for fear of what our Tweeter-in-chief is attempting to ban or push through into law now. Is he declaring another travel ban directed toward Muslim countries? Or banning transgender people from serving their country in the military? Or supporting another child molester in an upcoming election? "Will the madness ever end?" I ask the universe, while hurling my phone across the room. Apparently not. Because Trump just banned the CDC from using these words, and it's bad news for families.

The Chicago Tribune reports that Trump administration officials have forbidden a list of six words from appearing on official documents for next year's budget. (No, really. I wish I were kidding, here.) On Thursday, policy analysts at the Centers for Disease Control and Prevention (CDC) were informed of the list during a meeting with senior CDC officials in charge of overseeing the budget. The forbidden words, according to an analyst who was part of the briefing, are as follows: "Vulnerable," "entitlement," "diversity," "transgender," "fetus," "evidence-based" and "science-based."

The Washington Post reports that analysts were given alternative phrases to use in some cases. Instead of using “science-based” or ­“evidence-based,” for example, the suggested phrase is “CDC bases its recommendations on science in consideration with community standards and wishes," the publication reports. Here's the thing, though: Multiple offices at the CDC have responsibility for work that uses some of these banned words, as the publication reports. The National Center for HIV/AIDS, Viral Hepatitis, STD, and TB Prevention is trying to prevent HIV among transgender people, for example. And the CDC work on Zika virus-related birth defects involves research on developing fetuses. The Department of Health and Human Services (HHS) — which oversees the CDC — “will continue to use the best scientific evidence available to improve the health of all Americans,” HHS spokesman Matt Lloyd told The Washington Post. “HHS also strongly encourages the use of outcome and evidence data in program evaluations and budget decisions.”

“I’m not sure what the ultimate rationale is for doing this aside from trying to erase certain types of people off the map,” Dr. Loren Schechter, director of the Center for Gender Confirmation surgery at Weiss Memorial Hospital in Chicago, told HuffPost. " ... Simply choosing to ignore reality, science, medicine, will not make these things go away and will not really advance anyone’s cause or lead to improved health outcomes.” Schechter continued:

This is quite an absurdity. The president sets the agenda. It’s quite scary ... it really sends a chill down your spine. I can’t imagine how you don’t allow terms to be used. It’s sort of like the thought police here.

Twitter users were also quick to compare this eery ban on words to George Orwell's novel 1984. "What's next for this administration? Burning books?" one person tweeted. "America is great because we can use any words we like. Science is based on facts, banning words doesn't change the results of studies. I hope the #CDC scientists #Resist." Others simply quoted from the dystopian novel.

Others pointed to an undeniable pattern by the Trump administration: A complete disregard for LGBTQ people, women's health and science. And it must be stopped.

Let's just take a step back for a moment and let this deeply-concerning turn of events sink in. The president of the United States won't let a science-based government agency use the term "science-based" or "evidence-based." I mean, I've always suspected Trump and his administration were scared of facts — with the blatant disregard for climate change and all — but this pretty much shouts it from the rooftops. And the words "transgender" and "fetus"? Okay, I get why they're banned — because Trump and many of his supporters don't believe a person can actually be transgender. They think it's "made up". (Which it isn't, and no amount of word-banning will change the fact that being transgender exists.) As for "fetus," this is clearly a jab at anything pro-choice, even though it's literally a medical term.

"This is terrifying and outright insane," one Twitter user declared. Another person tweeted, "If only they were as horrified by gender inequality and workplace abuse as they are by ‘fetus.'"

My first thought upon reading about this troubling ban on words was, "Can you even actually ban a word?" followed immediately by, "What about freedom of speech?" And how about we allow this science-based government agency do its job? I have a feeling the CDC isn't going to take this lying down because although, yes, these are "just" words, they mean a lot to the health and wellbeing of families across the nation. Sorry Trump, but you can't just go around banning words because they don't jive with your heinous agenda.