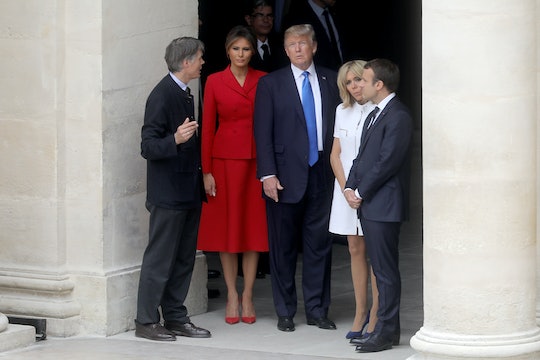 President Trump is known for many things, one of them being his awkward greetings. Usually, it's a handshake that goes on way too long. But on Wednesday, Trump greeted French first lady Brigitte Macron with a comment that surpassed even that.

Arriving in Paris, France with U.S. first lady Melania Trump, President Trump got out of his limo and greeted French President Emmanuel Macron first. While Melania was still getting out of the car and saying bonjour to Macron, Trump pulled Brigitte Macron's arm and was overheard telling her that she was in "good shape."

The worst part? He then turned to Macron and repeated his comments, gesturing toward Macron's wife and saying, "beautiful," as if he were complimenting the French president's new vacation home or vehicle. Some people may see this comment as just a nice compliment, much like men who catcall swear they just want to make a woman smile (even if it makes the woman feel unsafe). But it's not. It is not necessary to "compliment" a woman, especially the first lady of France, on her appearance or body type.

A mere, "nice to meet you," normally suffices in this occasion, just so we're clear for future events.

This is the first time Trump has met Macron's 64-year-old wife in person and given that the French couple has drawn criticism for their age difference (she is 30 years old than her husband, much like the Trumps' age gap), it could be that Trump was literally impressed by the woman's looks. He once joked that only an airplane could look "so beautiful" at 30 years old, so it's not impossible, though the inner workings of Trump's mind will likely remain a mystery to the general public.

Earlier this summer, Trump came under fire for interrupting a phone call and beckoning a female Irish reporter over to his desk simply to tell her she had a nice smile. He then returned to his call with the Irish prime minister and joked that he bet "she treat[ed] [him] well," a reference to Trump's relationship with what he calls "fake" media that he insists are out to get him.

Trump has also been accused of sexual assault and harassment by twelve women. (It's important to note that he's never been convicted or charged in regards to any such allegations.) Then again, he also often refers to inanimate objects or things, like airplanes and Republican written health care plans, as "beautiful." Maybe Trump just needs to think of some synonyms for things he finds aesthetically pleasing.

Perhaps there was no harm done in telling Brigitte Macron she's in good shape and treating her like her husband's property. Perhaps she should just stop being so fit and pretty in the first place, so people won't feel the urge to tell her so. Right?