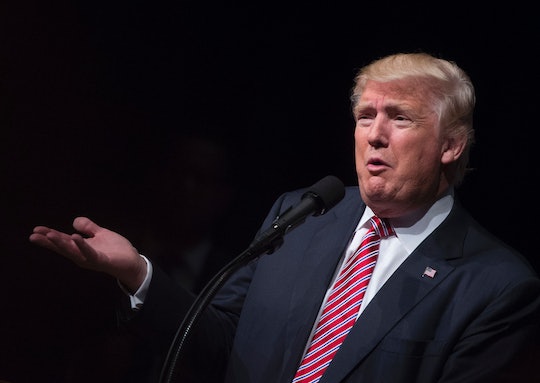 Trump Kicks Out A Mom With A Crying Baby At Rally, Making His Opinion Of Motherhood Clear

Trump's rally Tuesday in Virginia brought the usual mix of racism and vulgarities being hurled at his perceived opponents. But just when you thought there wasn't anyone left for the GOP nominee to insult, he found another easy target—a mom with a crying baby who dared to interrupt his stump speech. Yep, that's right. Trump humiliated a mom with a crying baby at his Virginia rally and asked her to leave, showing, once again, how detached he is from America's mothers and how little respect he has for the issues moms care most about.

Trump wasn't doing so great with moms before the rally started. Over the weekend Trump made critical comments about the religion of Ghazala Khan, a Gold Star Mother who appeared alongside her husband at the Democratic National Convention to condemn Trump's proposed policy banning Muslims from the country. Kahn's fellow Gold Star Mothers, mothers whose sons and daughters died serving the country in the Armed Forces, came back hard at Trump, singing a letter as a group saying he is "cheapening the sacrifice made by those we lost."

Then there was the mother at Trump running mate Mike Pence's rally in Carson City, Nevada, who, while holding up a picture of her son, who is serving the country in the Air Force, was booed by rabid Trump fans for asking Pence for an explanation about Trump's lack of respect for the military and veterans.

There's only one thing you need to know about a group of moms: it doesn't matter your politics, you take on one vulnerable mom, you might have trouble on your hands. But now, Trump is branching out and insulting the mothers of young children as well.

On Tuesday, during a Virginia rally, Trump was distracted from his usual tirade by a crying baby. At first he seemed to show the mother a kindness saying, "Don’t worry about it," Trump said, according to Politico. "I love babies. I hear that baby crying, I like it. What a baby. What a beautiful baby. Don’t worry, don’t worry. The mom’s running around like — don’t worry about it, you know. It’s young and beautiful and healthy and that’s what we want."

Then he continued railing against China.

But when the baby kept crying, Trump took the time to stop, turn to the mother and let her know he was just being sarcastic before and wanted her and the baby to leave. “Actually, I was only kidding, you can get the baby out of here," the Republican nominee said to laughter and applause. "That’s all right. Don’t worry. I, I think she really believed me that I love having a baby crying while I’m speaking. That’s OK. People don’t understand. That’s OK."

No Donald, it's not. Publicly shaming a mom is never OK, especially one who showed up despite having a tiny baby to support your campaign.

It's obvious from his previous comments, relationships, actions — OK, his whole life story — that he has little respect for women in general. But what he needs to recognize and respect is that mamas make the world go around. Don't mess with them, because most know exactly what it feels like to be the woman in the crowded room with the crying baby. Trying to publicly humiliate a young mother is never a good look.

See, moms tend to grieve right along with women who send their children to fight in wars. Many moms don't like it when one of their own is disrespected and humiliated. Someone with a clue in the Trump campaign might want to let their candidate know.

So, go on, Donald. Continue to try to divide up the country by race, religion, and politics. But when you insult one mom, you insult many of them, and you do so at your own political peril.