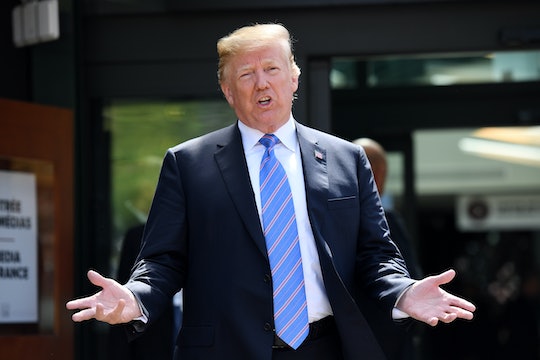 While the NBA Finals posed a brief threat to Monday night's broadcast of The Bachelorette, the Golden State Warriors managed to wrap up the championship series in just four games, and so The Bachelorette aired as usual. Unfortunately, the historic summit between President Trump and Kim Jong Un did interrupt the broadcast, as ABC News covered the very first handshake between leaders of North Korea and the United States in history. Obviously, tweets about Trump and Kim Jong Un crashing The Bachelorette poured in and proved that Twitter contains multitudes.

Luckily for fans (except for those on the West Coast), we were assured by Chris Harrison and The Bachelorette's official Twitter account that tonight's show would air in its entirety in overtime, despite interruptions by ABC News. But we still endured multiple replays of the ~historic handshake~, complete with Martha Raddatz's enthused body language interpretations, and George Stephanopoulos' keen reporting on exactly when the world leaders did and did not smile. Exciting stuff! Naturally, the President of the United States and the Supreme Leader of North Korea meeting after 65 years of tense hostility lent itself to Bachelorette-themed parody, and Bachelor Nation was all too eager to flex its political analysis muscles.

After months of taunting each other with literal nuclear war, Trump and Kim agreed to a behind-closed-doors meeting to discuss the mounting tension between the two nations and attempt diplomacy. The one-on-one (plus translators) nature of the meeting was a break from the practice of having at least one aide on-hand apiece to help support the conversation. The fact that Trump and Kim intended to have a frank discussion amongst themselves was a marked departure from the norm.

According to CNN, a US official teased that one intention of the summit is to release a "statement of understanding" between the two nations, presumably with the hope of denuclearization.

"I feel really great. We'll have a great discussion," Trump said to the press corps assembled before he and Kim retired for the private talk. "This will be tremendously successful. We will have a terrific relationship."

Meanwhile, on The Bachelorette, Becca was fielding two group dates, a one-on-one date, and two ER visits. First, David the chicken/venture capitalist fell off his top bunk in the middle of the night and ended up in intensive care — an injury The Bachelorette heavily teased as the result of a fight between David and Jordan, but of course was totally innocuous. He was ultimately okay and intends to return to the competition. Then, Clay, a professional football player, broke his wrist during — what else? — a group date football game. He injured it so badly that he had to have surgery on it, which meant leaving the competition for good. Obviously, when confronted with the possibility of losing his livelihood or staying on The Bachelorette, he opted to take care of himself and leave the show.

Meanwhile, after about 40 minutes, Trump and Kim emerged from their discussion to have a larger meeting including their respective staffers. So, for all the jokes, they did literally go from having a one-on-one to a group date. Despite the hopeful tone of ABC News, Twitter seemed pretty staunch in its belief that reality TV escapism time is precious, and to cut into it with extremely stressful international news coverage is, in a word, rude. In the end, The Bachelorette ran about 15 minutes over time and ended with Becca bidding Clay a tearful and unexpected farewell. We'll have to stay tuned till next week to see how the rose ceremony shakes out.