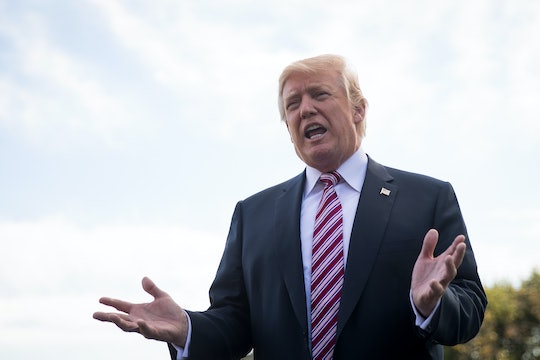 Only President Donald Trump could pick a fight in the middle of a disaster. On Saturday morning, Trump lashed out at San Juan, Puerto Rico's mayor, Carmen Yulín Cruz after she criticized the federal government's response to Hurricane Maria and it shows, again, that his priorities might be a little confused.

On CNN Friday night, Yulín Cruz said on Anderson Cooper's show, "We're dying here. We truly are dying here. I keep saying it: SOS. If anyone can hear us; if Mr. Trump an hear us, let's just get it over with and get the ball rolling." To drive her point home, she also wore a black t-shirt that read, "Help Us, We Are Dying." Yulín Cruz elaborated:

People are drinking out of creeks here in San Juan. You have people in buildings and they're becoming caged in their own buildings — old people, retired people that don't have any electricity.

Trump did not take the critcism lightly. Early Saturday morning he said in a series of tweets, "The Mayor of San Juan, who was very complimentary only a few days ago, has now been told by the Democrats that you must be nasty to Trump ... Such poor leadership ability by the Mayor of San Juan, and others in Puerto Rico, who are not able to get their workers to help."

He added, "They want everything to be done for them when it should be a community effort."

The mayor tweeted just after the president, "The goal is one: saving lives. This is the time to show our "true colors". We cannot be distracted by anything else." Despite her urging Trump to not take her comments as a personal attack and to instead focus on helping the people Puerto Rico, Trump kept going. Later in the morning, he attacked the "Fake Media" for taking "spirit away from our soldiers and first R[esponder]s. Shame!"

He also tweeted various tweets lauding the administration's disaster relief efforts so far and announced that the he and Melania were visiting Puerto Rico on Tuesday and would hopefully visit the U.S. Virgin Islands, where people were "working hard."

Instead of offering assurances that he was taking actions to remedy the situation in Puerto Rico as quickly as he could, Trump decided to attack residents instead, when nearly half of the 3.4 million people who live there are still without electricity and running water, according to NBC News. Now is the not the time for a Twitter fight. A mere, "We hear you, and we're on it," would have sufficed.

Yulín Cruz's comments on Friday night were in response to Elaine Duke, the acting secretary of Homeland Security, who defended what some perceive to be the administration's insufficient response to the storm's destruction. She said on Thursday, that it was a “really a good news story in terms of our ability to reach people and the limited number of deaths” from the hurricane.

Yulín Cruz said in response this week, "Dammit, this is not a good news story. This is a 'people are dying' story. It's a life-or-death story." Duke later traveled to Puerto Rico on Friday and clarified her statement, saying that the situation on the ground “is not satisfactory."

Although many are defending the administration's relief efforts, others have acknowledged that it's taking more time to help Puerto Rico, a territory of the U.S., than it did Houston or Florida after their respective storms. U.S. Army Lt. Gen. Jeffrey Buchanan, said this week that the military response to the devastation from Hurricane Maria in Puerto is "not enough," according to ABC News, and that they needed to bring in more soldiers to help the efforts.

Because supply chains have been cut off by a lack of electricity, diesel, flooded roads, and a lack of manpower, there are thousands of cargo containers with supplies that have arrived in San Juan but haven't been distributed yet throughout the island, according to NPR. In addition to not addressing those types of issues on the island, Trump and his spokespeople have not been very reassuring to the residents of Puerto Rico.

While noting that the island was "completely destroyed," the president also said this week that some "big decisions" about how to rebuild would have to be made. It's understandable why leader such as Yulín Cruz are frustrated: Everything about the future of their home seems uncertain in Trump's hands.

Hopefully, when Trump arrives in Puerto Rico this week, he can put his bruised ego behind him and listen to local leaders on the ground to see what they need the most. Getting medicine, food, and water to people is the first step. There will be time to point fingers later.