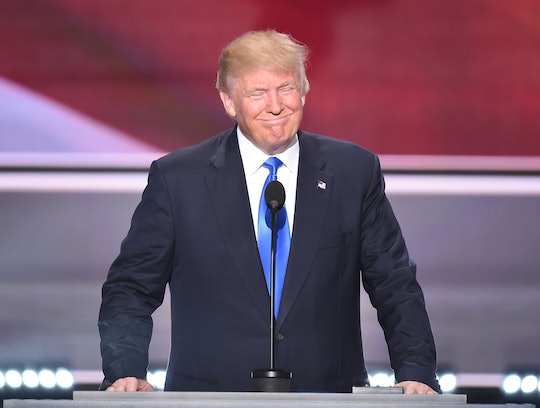 Donald Trump's campaign has undoubtedly been full of racist, sexist, xenophobic, and anti-Muslim rhetoric, to name a few of his discriminatory themes. It's no secret that we don't live in a "post-racial America," or that prejudice and misogyny still run their course in the United States. But, while overt forms of racism and misogyny still dangerously exist (cue disproportionate police violence towards black people, and other people of color, and a stark rape culture shown through cases like Brock Turner's light sentencing) – America has continued to struggle with more subversive, systemic forms of racism, implicit racial biases, and inherent sexism in the Obama-era. But Trump has run a campaign with an unapologetic in-your-face type of prejudice. And Trump merchandise at the RNC captures the overt discrimination that’s become his campaign.

The Huffington Post captured some of the merchandise being sold by street vendors outside the RNC in Cleveland. And the items are certainly unapologetically misogynistic. RNC attendees can purchase T-shirts that show Trump riding a motorcycle with a T-shirt referring to Secretary of State Hillary Clinton as a "b*tch," as she frighteningly falls off the bike. And if that's not outrageously misogynistic or sexist enough, vendors are selling pins reading "Life's A B*tch... Don't Vote For One" and "KFC... Hillary Special... 2 Fat Thighs... 2 Small Breasts... Left Wing."

One t-shirt captured by The Huffington Post shows Donald Trump's face over Muhammad Ali's body — an edited version of the iconic photo by Neil Leifer showing Ali hovering over Sonny Liston after a first-round knock out. Except on the t-shirt, Liston is replaced by a photo of Clinton. It appears as though Trump has physically beaten Clinton.

And while the merchandise is sold by independent street vendors outside the RNC arena, it says a lot about what's deemed as attractive to Trump supporters and convention-goers.

It's important to note that this isn't the first time a presidential election has revealed vile, overt, and open prejudice. Just eight years ago when President Obama ran in 2008, he and the campaign received openly racist attacks. There were reports of symbolic cross burnings around the country, assassination threats, nooses hung in various locations, and n-word usages by racists that, I'm sure, are uncountable. Not to mention, his citizenship and religion were constantly (and continue to be) contested. Although there are cases in which many believe Clinton, his Democratic opponent at the time, and her campaign had covertly exploited racial tensions with racial undertones, Trump outwardly spews discriminatory attacks himself.

Trump supporters, racists, sexists, and anti-Muslim, and xenophobic people existed way before Trump ran for president. But the Republican presidential nominee has talked plans to ban all Muslims (or more recently "extreme vetting") and build a Mexico-U.S border wall. He has made outrageously sexist remarks about Carly Fiorina, Arianna Huffington, and Megyn Kelly, to name a few. And he has called Mexicans rapists (some, he said, are "good people," of course), and has tweeted inaccurate, and problematic data on crimes involving black people. Not to mention he has encouraged violence at his rallies. The merchandise sold outside the RNC is unspeakable, but it's not surprising that it exists since it's what Trump has been endorsing all along.