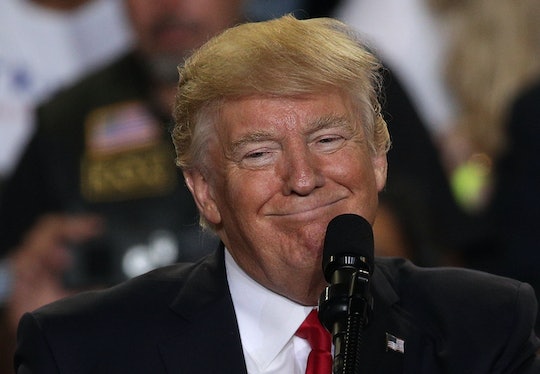 According to a new report from Rewire, the Trump administration is planning on rolling back certain protections for vulnerable groups under the Affordable Care Act, or ACA. And if President Donald Trump reverses civil rights protections under the health care law, the transgender community, along with pregnant people, could face increased danger and obstacles to proper health care. Romper has reached out to the White House for comment on the reversal and is awaiting a response.

On Tuesday, the Department of Health and Human Services moved to pause ongoing litigation in Texas, where a federal district court had temporarily blocked a set of ACA regulations known as Section 1557. Under Section 1557, health care providers receiving federal funds are not allowed to discriminate on the basis of a whole host of factors, ranging from race to age. Most pertinent in this particular case, though, is sex, which covers both gender identity and reproduction. Basically, what current law says is that, even if you're a religiously-affiliated provider, as long as you get money from the government, you can't deny health care to transgender people or to people seeking reproductive care. And, oh yeah, Section 1557 also requires health care providers to treat trans people as the gender with which they identify.

But with Tuesday's motion, the temporary blocking of Section 1557 protections issued by the Texas court will remain in place while the protections go back to the Department of Health and Human Services for review.

And the department is expected to gut them.

In a statement, Mara Keisling, the Executive Director of the National Center for Transgender Equality, reacted to the administration's move to undo Section 1557 by saying,

The Section 1557 regulation has been literally life-saving for transgender people all across the country, who are routinely turned away from emergency rooms and doctors’ offices and refused coverage for critical medical care. Now, the Trump administration is going after transgender people yet again and trying to take away these basic protections. The administration is rejecting the views of every major medical associations, most courts, and most Americans, who believe that people should not be denied health care because of who they are. That’s not just bad science and bad law—it’s a dangerous attack on transgender people’s ability to survive.

This is not the only move the Trump administration seems to be making to reverse protections for the LGBTQ community. Trump previously revoked an Obama-era rule protecting transgender students and their right to use the bathrooms of their choice. And on Thursday, Trump is widely expected to sign a "religious liberty" order that could allow people to claim religious objections and refuse service to marginalized groups.

Needless to say, it's a scary time for civil rights in this country.