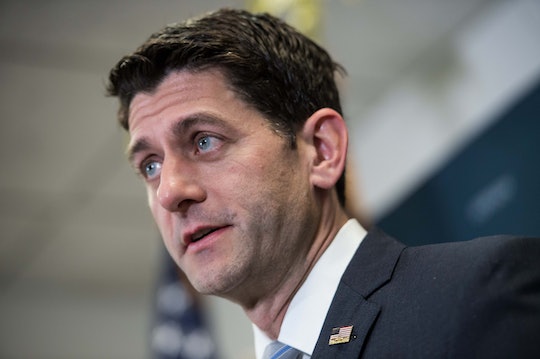 Trump & Paul Ryan Will Give Congress More Power Than Before, But What Does That Entail?

During an interview on CBS' 60 Minutes, Republican House Speaker Paul Ryan said President-elect Donald Trump would give Congress more power than it had during President Barack Obama's administration. After discussing his new relationship with the president-elect, Ryan told CBS anchor Scott Pelley that he'd discussed the Constitution "extensively" with Trump. He added that he believed Obama had "stripped" Congress — and by extension, U.S. citizens — of much of its strength.

When Pelley asked if Trump understood that the presidency was not similar to being CEO — that Congress would have a say in his decisions — Ryan answered:

Ryan didn't detail what aspects of the Constitution Trump felt Obama had overstepped, but many Republicans have accused the president of overreaching with his use of executive orders. During his campaign, Trump himself said that he would "cancel every unconstitutional executive action, memorandum and order issued by President Obama" on his very first day in office.

However, what would it look like if Trump and Ryan "reset the balance of power"? Judging by Trump's original campaign promises, one might think that would entail less use of executive orders — but Trump has already proposed several policies in which he'd avoid the need for Congressional approval, according to Bloomberg.

"The immigration laws of the United States give the president powers to suspend entry into the country of any class of persons," he said in June, vowing to ban certain immigrants. "I will use this power to protect the American people."

He also promised a group of law enforcement officials last year that he would use an executive order to sentence anyone who had killed a police officer with the death penalty. "One of the first things I do, in terms of executive order if I win, will be to sign a strong, strong statement that will go out to the country — out to the world — that anybody killing a policeman, policewoman, a police officer — anybody killing a police officer, the death penalty," he said, according to CNN. "It's going to happen, OK?"

Trump also recently suggested revoking citizenship from (or imprisoning) anyone who burns an American flag, a distinctly unconstitutional proposal, and said he wanted to "open up" libel laws to journalists (a process that would require he alter the First Amendment of the Constitution, according to The New York Times). He advocated for the use of waterboarding and the torturing of terrorists' family members.

Considering that Trump has already promised to take action through a few executive orders and that he's pledged to do plenty of things that fly in the face of the Constitution, it's hard to say what a "reset" balance of power would look like under Trump. However, if Congress does gain more power over Trump's decisions in the next four years, there's a chance Americans might not see a few of his proposed policies fall into place, for better or worse. Given the duo's tumultuous history, though, perhaps that's exactly the goal Ryan is after.