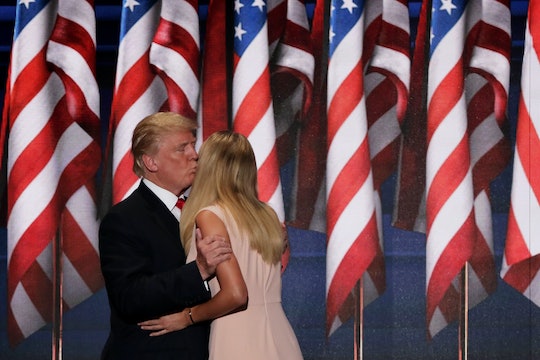 A healthy portion of onlookers have long been grossed out by the way that President-elect Donald Trump looks at, talks about, and touches his eldest daughter, Ivanka Trump. That portion would do well to grab a bucket before reading the following: BuzzFeed has reported that an unpublished draft of a recent syndicated column by the Washington Post's Richard Cohen contained a quote in which Trump seemingly implied being attracted to his daughter yet again — this time, when she was just a child.

According to BuzzFeed, the column containing the quote was circulated on Monday to various outlets that publish Cohen's column, but the published version that appeared on Tuesday omitted the line. Incredibly, it appeared as a casual aside in the middle of a sentence about Trump's son-in-law, Jared Kushner:

Jared Kushner, our Tom Hagen, who married Trump’s stunning daughter Ivanka — "Can I ask you something?" Trump asked someone I know, about his then-13-year-old kid, "Is it wrong to be more sexually attracted to your own daughter than your wife?" — has lately lost some of this Boy Scout aura. It turns out Kushner’s admission to Harvard was preceded by his father’s $2.5 million pledge.

Washington Post editor Fred Hiatt told BuzzFeed, "We don’t think it would be fair to our writers to discuss the editing process, and don’t see what is to be gained by talking about things that are not published." Trump is known for being litigious, particularly against the media. One could make the argument that a president-elect espousing incestuous desires is the very definition of newsworthy, but perhaps the Post didn't feel that the benefit outweighed the risk. Plenty of other outlets have published works implying that Trump's relationship with his daughter is, shall we say, unhealthy, but this would be the most damning by far.

In a 2006 interview, Trump permitted Howard Stern to characterize Ivanka as a "piece of ass." In 1997, while a then-16-year-old Ivanka was hosting the Miss Teen USA pageant, Trump repeatedly called her "hot." In other interviews, he's called her "voluptuous" and "a great beauty" with "the best body." In a 2006 appearance on The View, Trump said that if Ivanka wasn't his daughter, he'd be dating her, and in a 2015 Rolling Stone interview, he repeated his assertion, saying, "If I weren't happily married and, ya know, her father..."

These are not innocent compliments from a proud parent. They're inappropriate, overtly sexual, and, like much of what Trump says and does, should not be normalized. A parent should never, even in jest, express a desire to date their child. I can't believe I even have to type those words. And just in case that quote is accurate, and Trump sincerely wonders if it's wrong to be "more sexually attracted" to his own child than his spouse, I'll provide an answer. Yes. It is wrong to be sexually attracted to any child, particularly your own child, regardless of your marital status.