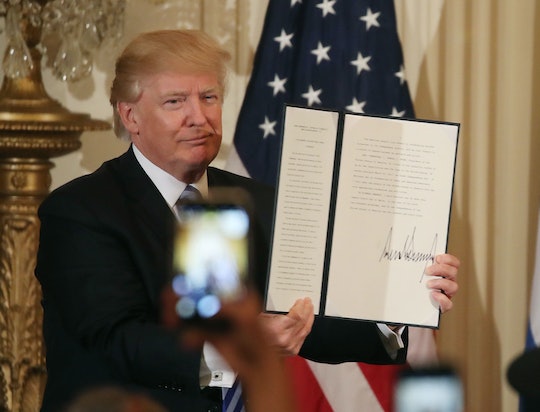 Trump Responds To AHCA Being Killed

Republican leaders made the decision to pull the American Health Care Act on Friday from the House, due to a lack of support. This is good news for the millions of people who would be affected by the repeal of the Affordable Care Act. But just moments after the repeal, in an interview with The New York Times, Trump responded to the AHCA being killed, and in typical Trump fashion, he blamed it on someone else — the Democrats.

Yes, Trump has placed the blame on House Democrats for the lack of support of the health care replacement plan — because they're the bad guys here. According to The New York Times, Trump stated that the Democrats would "seek a deal within a year after 'Obamacare explodes' due to high premiums." Luckily, part of the job of being president isn't predicting the future. Trump continued, "the best thing that could happen is exactly what happened — watch. It's enough already." Trump then took to television to further explain what happened, addressing TV viewers at home from the Oval Office about the health care replacement bill. "A lot of people don't realize how good our bill was because they were viewing phase one," Trump said. "But when you add phase two, which was mostly the signs of Secretary Price and you add phase three, it became a great bill."

"We had no Democrat support," Trump said during his address. But, he did say he is willing to work with Democrats to come up with another health care plan. "If they got together with us and got a real healthcare bill, I would be totally open to it and I think that's going to happen."

Of course, Trump could not state that he wanted to work with Democrats without offending some people — Minority Leader of the House of Representatives Nancy Pelosi and Sen. Chuck Schumer — in the process. "I think the real losers are Nancy Pelosi and Chuck Schumer because now they own Obamacare. They own it, 100 percent own it," Trump said during his address. It's unclear how owning Obamacare is a bad thing, though.

Trump pulled the bill as the result of lack of support in general — from both Democrats and Republicans. Therefore the blame shouldn't be placed just on the Democrats, but rather the bill itself: it didn't have support because people didn't like it. The repealing of this bill could be seen as one of Trump's first big failures, according to the Washington Post — especially after Trump promised to voters on the campaign trail that he was going to "repeal and replace" Obamacare multiple times, and that he would do it within his first 100 days in office.

Trump can place the blame on whomever he wants, but there was a collective lack of support for the AHCA from all sides. His statements about the pulling of the AHCA only prove that the killing of the AHCA was a defeat.