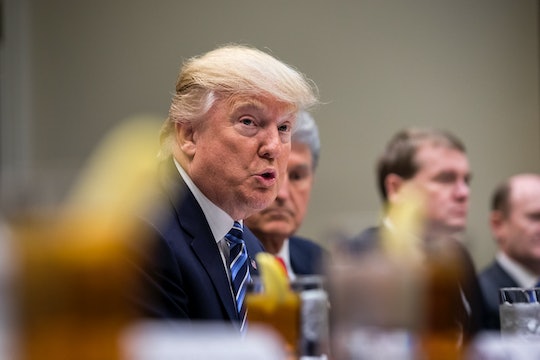 Following a federal appeals court ruling on Thursday, which upheld an earlier stay on an executive immigration order, allowing travelers and refugees previously barred from entry into the United States to re-enter the country, President Trump responded, noting that the travel ban fight was far from over. The decision follows on the heels of an earlier ruling by U.S. District Judge James Robart on Feb. 3, which temporarily halted Trump's travel ban. True to character, Trump immediately voiced his displeasure in the most recent ruling on his personal Twitter account.

"SEE YOU IN COURT," Trump wrote in all-caps. "THE SECURITY OF OUR NATION IS AT STAKE!"

The unanimous ruling, some 29 pages long and a sharp rebuke of Trump's order, isn't permanent, as it did not rule on constitutionality. Trump's threat to "see [them] in court," then, isn't unfounded.

In contrast, the Washington state attorney general's response to the news was fittingly ecstatic, and also delivered in all-caps. "DENIED. UNANIMOUS. PER CURIUM," Attorney General Bob Ferguson's office wrote. The tweet was followed by a second post, highlighting a screencap of the ruling's conclusion, which read, "For the foregoing reasons, the emergency motion for a stay pending appeal is DENIED." The final word had been bolded.

Trump and the Washington state attorney's office weren't the only ones garnering attention for their response to the decision. "3-0," former Democratic presidential candidate and Secretary of State Hillary Clinton wrote in a succinct tweet on Thursday night, referring to the unanimous decision of 9th Circuit Court Judges William C. Canby, Michelle T. Friedland, and Richard R. Clifton — the latter of whom is a conservative and was appointed by President George W. Bush.

In layman's terms, the court determined the government had not adequately proved in its arguments that irreparable damage would be done if the stay were not reversed. The court decided, in lieu of this evidence, that it would allow for the initial stay put in place by Robart to remain, while the contentious ban continued to be debated within the judicial system. In the meantime, it determined, those previously banned by the executive order would be allowed into the country, until further notice.

The legal battle over Trump's divisive immigration order will likely continue in the coming weeks — but while the victory may not last, it's at least secure for now.