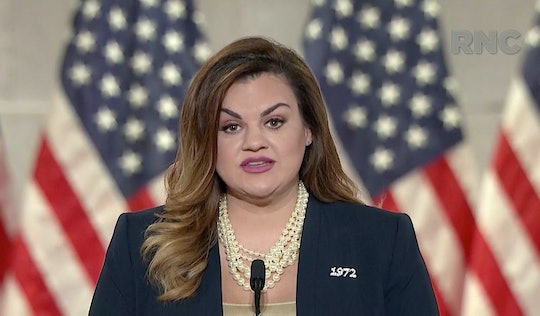 Amid nationwide protests over police brutality and systemic racism, a featured speaker at the Republican National Convention has garnered headlines for her history of controversial statements. In June, after the police killing of George Floyd, anti-abortion activist Abby Johnson defended cops who'd profile her biracial son, saying he was "statistically" more likely to commit a violent crime and more likely to look "intimidating" than her white sons. She's also voiced support for bringing back "head of household voting," noting that "in a Godly household" it would be the man who'd get "the final say" on how the vote was cast.

"As a mom of five boys, and one of those boys being biracial, I recognize that I'm gonna have to have a different conversation with Jude than I do with my brown-haired little Irish, very, very pale-skinned, white sons as they grow up," Johnson said in a since deleted YouTube video obtained by Vice News. (Johnson's husband Doug has previously blogged about the family's experience adopting Jude.)

"Right now, Jude is an adorable, perpetually tan-looking little brown boy," Johnson continued. "But one day, he's going to grow up and he's going to be a tall, probably sort of large, intimidating-looking-maybe brown man. And my other boys are probably gonna look like nerdy white guys."

But Johnson said it didn't make her angry to know that her biracial son could be looked at or judged differently than her white sons due to his skin color. "It doesn't make me angry, you know why?" she said. "Because I look at statistics over emotion."

"Statistically, I look at our prison population and I see that there is a disproportionately high number of African-American males in our prison population for crimes, particularly for violent crimes," Johnson continued. "So statistically, when a police officer sees a brown man like my Jude walking down the road — as opposed to my white nerdy kids, my white nerdy men walking down the road — because of the statistics that he knows in his head, that these police officers know in their head, they're going to know that statistically my brown son is more likely to commit a violent offense over my white sons."

Johnson went on to say it was "smart" for a police officer to be "more careful around my brown son than my white son" and that said racial profiling by police did not anger her. She did, however, say that it would make her angry if a police officer treated her brown son "more violently" than her white sons.

But while Johnson may believe these statistics show Black and Hispanic adults are more prone to committing crimes than white people, studies continue to show that law enforcement disproportionately police minorities. For example, a 2018 report on police interactions with the public from the Bureau of Justice Statistics showed Black people were more likely to be stopped by police and police were twice as likely to use force or threats against Black and Hispanic residents they initiated contact with than white residents. What's more, a 2014 Brookings Institute analysis of FBI data found that in 2011, only 6% of arrests involving Black men were for violent crimes.

This isn't the first time Johnson has drawn criticism for making a controversial statement. In May, she tweeted that she supported "bringing back household voting." In later tweets she clarified that under household voting each household would get one vote and "in a Godly household, the husband would get the final say."

On Tuesday, Johnson claimed abortion rights advocates were "so scared" of her upcoming Republican National Convention speech that they were "scrambling" to "dredge up whatever old tweets" they could find in an effort to detract from her anti-choice message.

Johnson, a former Planned Parenthood employee turned anti-abortion advocate, addressed the Republican National Convention later that evening in a speech that decreed President Donald Trump as "the most pro-life president we have ever had." In her speech, Johnson gave a graphic account of what motivated her to quit her job at Planned Parenthood and become an anti-abortion advocate. However, it's worth noting that many of the central details of Johnson's story have long been disputed. According to Texas Monthly, there are no records of the 13-week abortion procedure Johnson claimed to have witnessed before quitting her job.

In her since deleted YouTube video, Johnson argued that Black and brown people were incarcerated at higher rates compared to whites because of absent Black fathers. "I believe the primary reason that we see a lot of the illness in our society today and one of the reasons that we're seeing a lot of what's happening today in our society is because of fatherlessness, because fathers have not stood up and they have not taken their place in the home and particularly in Black homes," Johnson said. She went on to argue "70% of Black homes were without fathers," but did not disclose where she had gotten this statistic.