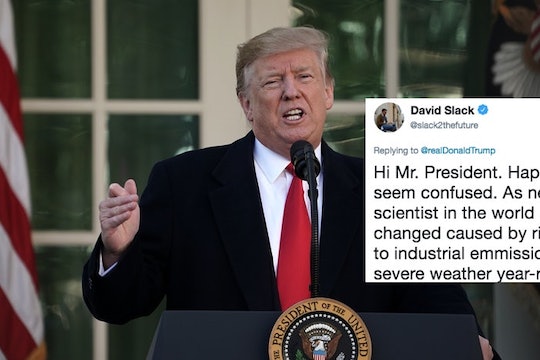 In a world governed by his own "alternative facts," President Donald Trump seems confused about some of the pressing and serious realities of our environmental health. After Trump said "we need" global warming amid an arctic blast hitting parts of the country, the POTUS was schooled on Twitter on why that is a complete and utter misunderstanding of what's really going on.

It all began in light of Wednesday's upcoming displaced polar vortex, in which temperatures throughout the country will drop, most notably in the Midwest, where the Star Tribune reported it could reach a negative 50F to 60F, with wind chill. In fact, Weather.com reported this could be the lowest recorded in decades.

It lead Trump to take to Twitter to glibly comment that, given the impending low temperatures, the United States could probably stand to have a little bit more "global warming," although he spelled it "waming."

"In the beautiful Midwest, windchill temperatures are reaching minus 60 degrees, the coldest ever recorded," he tweeted. "In coming days, expected to get even colder. People can’t last outside even for minutes. What the hell is going on with Global Waming? Please come back fast, we need you!"

Of course, climate scientists and anyone who passed third grade environment class could explain to you that global warming does not immediately cause a worldwide increase in temperature, rather, it creates more extreme weather conditions, such as Wednesday's vortex. As Scientific American explained, climate and weather are not the same thing, and the latter often becomes more erratic, unpredictable and extreme when the former is being drastically shifted.

The issue has unfortunately eluded the president, despite the onslaught of people on Twitter trying to explain to him what's really going on.

"Hi Mr. President. Happy to explain since you seem confused. As nearly every legitimate scientist in the world agrees, global climate changed caused by rising temperatures due to industrial emissions results in more severe weather year-round — including harsher blizzards," one person responded.

"I get that science is hard, but this ignorant tweet is just embarrassing," said another.

While many expressed their frustration at the lack of the president's understanding, and others tried to help inform him, others took a more somber approach to their response.

"[He] may mock climate change, but it is happening faster and with greater impact than predicted...and it is only a matter of time before many of his supporters figure out they are particularly vulnerable to its costly, life-altering effects," another follower shared.

It's actually not the first time that Trump has mocked the concept of global warming, or tweeted about his skepticism, for that matter. HuffPost reported that since 2016, Trump has referenced it multiple times, at one point attributing his "high degree of intelligence" for why he doesn't "buy" it.

"In the East, it could be the COLDEST New Year’s Eve on record," he wrote on Twitter back in 2017. "Perhaps we could use a little bit of that good old Global Warming that our Country, but not other countries, was going to pay TRILLIONS OF DOLLARS to protect against. Bundle up!"

Earlier in 2018, he also added: "Brutal and Extended Cold Blast could shatter ALL RECORDS - Whatever happened to Global Warming?"

Of course, it's disappointing and frustrating to see the nation's Commander-in-Chief not only so unaware of the harsh and extremely dangerous realities of a manmade threat to nature, but also to be so glib about it, mocking experts and scientists who are trying earnestly to warn us of the dangers that come with continuing to ignore our profound impact on our world.