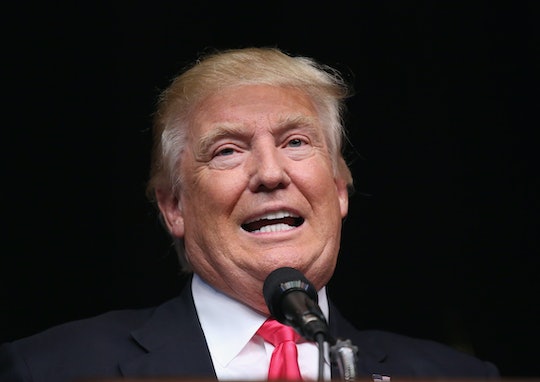 In a move that should surprise precisely nobody, Republican presidential nominee Donald Trump has gone back on his word. "Russia, if you're listening, I hope you're able to find the 30,000 emails that are missing. I think you will probably be rewarded mightily by our press," he said during a press conference on Wednesday, referring to some emails that were deleted from Hillary Clinton's server during her time as Secretary of State. Now, Trump says he was being "sarcastic" about Russia hacking Clinton's email, according to The Hill.

Similar to his "blood coming out of her wherever" or "there has to be some form of punishment" for abortions debacles, Trump has now changed his answer twice, because America forgot to call "no take-backs" before giving him a microphone. Whoops! After hinting at the idea of Russia hacking the former Secretary of State led to accusations of treason, Trump campaign Senior Communications Advisor Jason Miller told CNBC that Trump wasn't actively asking Russia to hack Clinton, but rather imploring anyone who might already have access to her emails to hand them over to the proper authorities. Trump also tweeted a similar message after the conference, no doubt at the behest of someone on his staff who realized the gravity of what he'd said on-camera.

It was a curious position to take, that he'd actually been asking foreign hackers not to commit treason, but to turn over any ill-gotten classified documents that were already in their position. If hackers were to turn emails over to the FBI, why on Earth would they be "rewarded mightily by our press"? So on Thursday morning, when he was gently guided towards a more believable excuse on Fox & Friends, he responded, "Of course I'm being sarcastic," before claiming that "They have no idea if it’s Russia, if it’s China, if it’s somebody else," that hacked the Democratic National Committee a few days prior. In fact, U.S. officials and cybersecurity experts are nearly positive that Russia was behind the attack, according to NBC News.

Trump then changed the subject to the content of the hacked emails, which he called "disgraceful." This is consistent with Trump's modus operandi; he's known for side-stepping questions and changing the subject when he's uncomfortable with a particular topic, which is quite often. After decades in the media, Trump's mastered the art of doublespeak and vague, non-committal answers, and knows how to take advantage of journalistic weak spots, as the Washington Post explored. When he is asked a follow-up question, he often shouts down the person asking it, changing the subject in the case of a male journalist, or in the case of a woman, telling her to be quiet. Trump will be given as many chances as he needs to craft an acceptable excuse for what he said, but luckily, there exists a record of each comment, and voters are able to compare them freely.