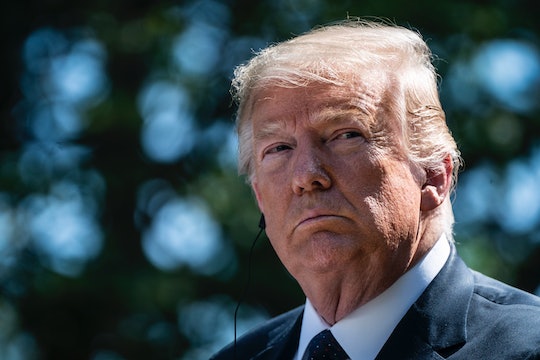 As teachers and parents are concerned about what education will look this fall and the Trump administration continuously calls for schools to reopen for in-person learning, even threatening to cut funding if they don't, a new poll has found that many Americans don't agree with the president's stance. In fact, a new survey conducted by YouGov for Yahoo! News found that 63% of Americans believe that President Donald Trump shouldn't push schools to reopen in the midst of a global pandemic.

Using a sample of 1,504 adult U.S. residents, the new YouGov and Yahoo! News survey conducted this week found that people are concerned about the speed at which the nation is reopening during the current pandemic, especially when it comes to schools. Over half of those surveyed reported that they believe states with a large number of new COVID-19 cases should not reopen schools for in-person learning. According to the survey 52% of respondents said they don't support schools reopening in hot spots for the virus, while 23% reported that they are OK with it.

The survey also touched on President Trump's repeated attempts to push schools to fully reopen in the fall. On July 6, Trump tweeted in all caps "SCHOOLS MUST OPEN IN THE FALL!!!" and two days later threatened to cut funding from schools if they do not. "In Germany, Denmark, Norway, Sweden and many other countries, SCHOOLS ARE OPEN WITH NO PROBLEMS. The Dems think it would be bad for them politically if U.S. schools open before the November Election, but is important for the children & families," Trump tweeted on July 8. "May cut off funding if not open!"

YouGov and Yahoo! News' new survey found that 63% of Americans don't think Trump should put pressure on schools to reopen while 25% reported they think he should be doing it.

Even with growing number of coronavirus cases — the Centers for Disease Control and Prevention reports there are more than 3 million confirmed cases of the coronavirus in the United States —Trump has continued to push for students to return to in-person instruction.

"It is a balancing act, but we have to open our schools," Trump said in an interview with CBS News. "We have learned one thing very strongly. Young people are in great shape when it comes to the coronavirus or whatever you want to call it. Young people are very, very, very much in good shape. And without question, they should open their schools, keep 'em safe, practice distancing, wash your hands."

While the American Academy of Pediatrics (AAP) has supported the idea of students returning safely to schools this fall, the organization said in a statement this week the decision must be made by public health agencies and science — not politics.

"Returning to school is important for the healthy development and well-being of children, but we must pursue re-opening in a way that is safe for all students, teachers and staff. Science should drive decision-making on safely reopening schools. Public health agencies must make recommendations based on evidence, not politics," the AAP said in a statement dated July 10. "We should leave it to health experts to tell us when the time is best to open up school buildings, and listen to educators and administrators to shape how we do it."

If schools return to in-person learning, the CDC has released guidelines for reopening, which Trump tweeted are "expensive" and "tough." Among several others, the CDC's recommendations for schools include installing physical barriers like sneeze guards or Plexiglass and spacing out desk seating in classrooms.

Dr. Anthony Fauci, one of the nation's top infectious disease experts, said in a Senate panel in June that schools should reopen based on how their state is reopening, and follow the guidelines accordingly. According to CBS News, Fauci said: "The basic fundamental goal would be as you possibly can to get the children back to school and use the public health efforts as a tool to help the children get back to school."