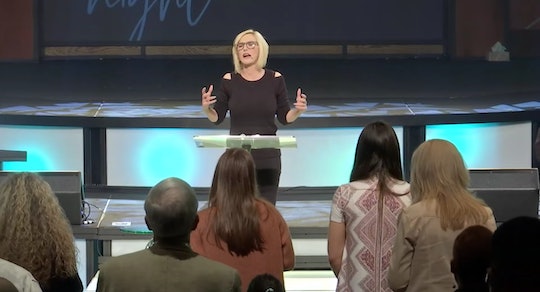 Paula White, a controversial televangelist who serves as President Donald Trump's spiritual adviser, has responded to backlash a sermon of hers sparked over the weekend. In a sermon delivered earlier this month, and shared online Jan. 24, White appeared to call for "all satanic pregnancies to miscarry." As outrage over her sermon continued to mount, White moved to clarify her comments Sunday in a tweet that claimed they had been taken out of context.

"I don't normally respond but clearly this has been taken out of context," White wrote in a statement released via Twitter on Jan. 26. "I was praying [Ephesians] 6:12 that we wrestle not against flesh and blood. Anything that has been conceived by demonic plans, for it to be cancelled and not prevail in your life. That is — any plans to hurt people."

According to Bible.com, Ephesians 6:12 notes that, "our struggle is not against flesh and blood, but against the rulers, against the authorities, against the powers of this dark world and against the spiritual forces of evil in the heavenly realms."

In a follow-up tweet, White claimed that the backlash against her sermon was "a disingenuous attempt to use words out of context for political gain." Romper has reached out to White for additional comment.

A clip of White's Jan. 5 sermon quickly went viral on Twitter over the weekend. In it, White fervently calls for the interruption of things deployed to hurt either "the church" or the nation.

But while White claimed her comments were a metaphoric prayer against evil, many have interpreted them to be a literal call for miscarriages. "No pregnancies are satanic. Every child is a gift from God," Jesuit priest and America magazine editor James Martin tweeted in response to White's prayer. "No one should ever pray for any woman to miscarry. No one should ever pray for evil or harm to befall another person. Jesus asked us to pray for our persecutors, not to curse them. To love our neighbors as ourselves."

The Church of Satan, which was founded in 1966 by Anton Szandor LaVey and, contrary to popular belief, does not worship Satan but rather revolves around atheism and the belief that all morals and values are subjective human constructions, has also commented on White's sermon. "Asking your imaginary friend to terminate someone else’s pregnancy against their will is pretty messed up," the church tweeted.

After speaking at Trump's inauguration in 2017, White was appointed advisor to the president's Faith and Opportunity Initiative in November. What's more, the New York Times has described White as Trump's personal pastor. In November, CNN reported that White House deputy press secretary Judd Deere said President Trump "called [White] a religious leader and is grateful for her prayers and counsel."

The White House did not immediately respond to Romper's request for comment on White's sermon.