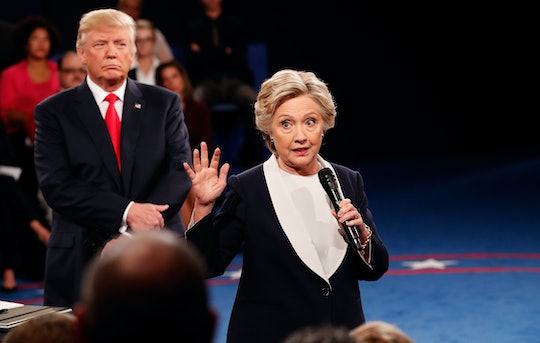 The second presidential debate on Sunday night took on a much different style than Hillary Clinton and Donald Trump’s first meeting back in September. The candidates answered questions directly from the audience in a town hall style format and could walk around the stage while they spoke. But, something that really stuck out to viewers, especially to women, was that Trump was standing over Clinton the whole debate while she answered various questions. While Trump’s lurking and looming reminded women of a form of sexist bullying we know all too well, the Democratic candidate stood firm and still, occasionally sitting patiently while her opponent was speaking — and it’s admirable for several reasons.

At various moments throughout Sunday night's especially tense and heated meeting, the Republican candidate would follow not far behind his rival as she casually paced the floor and answered questions from audience members.

One such moment happened when an audience member asked the candidates what they would do to bring health care costs down.

Trump snapped back, "No, I’m a gentleman, Hillary. Go ahead."

And as Clinton walked towards the audience member to answer his question, Trump lurked behind her in a bullying fashion that was an obvious attempt to assert his male dominance.

Many on social media quickly noticed the real estate mogul's bizarre behavior and responded accordingly with hilarious memes and jokes to lighten the mood:

As The Atlantic pointed out, Trump's behavior at the debate — staring fixedly at someone and invading their personal space — is a signal that someone is communicating hostility and aggression. So no matter how hard he tried to keep his temper under control, his body language was a dead giveaway that his opponent was really getting under his skin.

To add a bit more context to Trump's bullying behavior, Psychology Today noted that it often gets chalked up to the child-like conventions — akin to the "boys will be boys" or "that's just how men are" mentality.

But it's not okay for this behavior that women deal with far too often to be dismissed as something silly or simple. "For far too long, men with so-called bad tempers have gotten away with uncontrolled expressions of anger and frustration," Seth Meyers wrote in Psychology Today. "Research has shown that a nasty double standard exists when it comes to the expression of anger."

This behavior was far too familiar to so many women that Trump's lurking and looming behind Clinton started to trend on social media and women were sharing their personal experience with a man acting this way near them.

Although this type of bullying was glaringly obvious for so many viewers, the reactions it garnered proved that woman everywhere were wise to his behavior and ready to call out Trump's under-the-radar behavior, whether he ever opened his mouth or not.