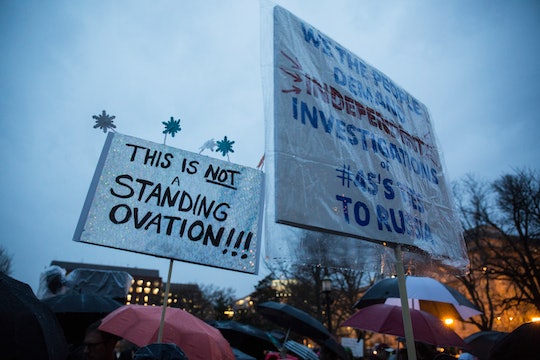 These Trump State Of The Union Memes Are Perfect

Tuesday marked President Donald Trump’s first joint address to Congress. The speech was hotly anticipated, protested, and, of course, memed. So here are some of the best Trump State of the Union memes to help you get through the speech, or to catch you up on the highlights afterwards, if you couldn’t bear to watch in real time.

Though it may feel as though Trump has already been president for approximately 1 billion years, it’s really only been a little over a month, so the address was not officially a “State of the Union.” (It would be too soon for Trump to really know the union’s state, after all.) The speech was set up to be more of an opportunity for Trump to outline his policy agenda for the year ahead, in a country already starkly divided about how he is handling his new power.

And for the opposition party, the speech represented a powerful opportunity to protest in a very visible way. Many Democratic representatives chose to make political statements with the guests they brought to the speech, inviting people who were being directly and adversely affected by Trump’s new policies, like Muslims, immigrants who were illegally brought to the United States as children, and LGBT people. (Trump, for his part, invited relatives of people who were killed by undocumented immigrants.)

Whew! Too heavy enough for you? Let’s get to meme-ing:

There was even more protest during the address. Many women from the House Democratic Caucus wore white to the speech as a nod to the suffragette movement and the continuing struggle for women’s equal rights in the face of a president who infamously bragged on tape about grabbing women in… ahem… sensitive areas of their bodies without their permission. And California Rep. Maxine Waters skipped the speech altogether, after also boycotting Trump’s inauguration.

Of course, despite the protest, Trump kept pushing his aggressive agenda, touching on a few of his favorite subjects, like pipelines, "radical Islamic terrorism," and, of course, promising to build "a great, great wall along our southern border." Oh yeah, and in terms of immigrants, he said, "Bad ones are going out as I speak." You know what that means. Another meme break!

In times like these, the internet can either drive us insane, or be one of the few places to get a good laugh in the midst of all the political craziness. So in the face of Trump’s address, thank goodness for some excellent memes.