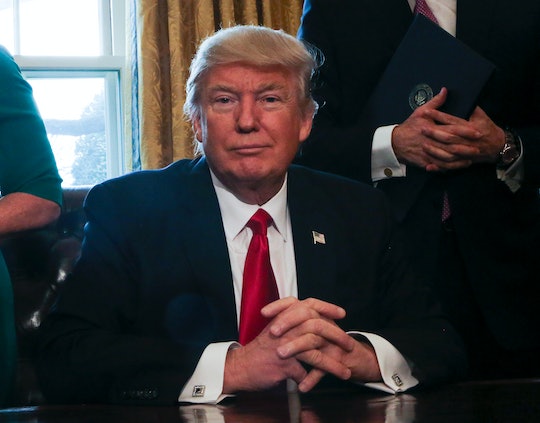 During a Fox interview aired before Super Bowl 51 on Sunday, President Donald Trump suggested voter fraud facts will prove him right, claiming he had seen voter registration records that showed voter fraud. "We can be babies, but you take a look at the registration," Trump told Fox. "You have illegals, you have dead people, you have this. It’s really a bad situation." No evidence has been produced, however, to imply that voter fraud occurred in the 2016 elections.

According to the BBC, fact-checkers have rejected Trump's claims of voter fraud, and in January, the National Association of Secretaries of State said it was unaware of any evidence of voter fraud in the 2016 elections. The association also said it had confidence in the "systemic integrity" of the country's election process.

Overall, cases of voter fraud in the United States have been exceedingly rare: According to Politifact, in the 11 years between 2000 and 2011, there were only 56 cases of non-citizens voting in American elections — and most non-citizens didn't realize that they were committing voter fraud. Election law expert Richard Hasen told Politifact:

There is no credible evidence I have seen to show large numbers of noncitizens voting in U.S. elections anywhere. ... The idea that 3 million noncitizens could have illegally voted in our elections without being detected is obscenely ludicrous.

Regardless of the facts that have largely pointed at a fair election, Trump has repeatedly claimed that millions of people voted illegally in November. He has also said that he would have won the popular vote if it weren't for the alleged cases of fraud.

Even Trump's own attorneys argued against voter fraud claims, however, and wrote that "all available evidence suggests that the 2016 general election was not tainted by fraud" when Green Party candidate Jill Stein demanded a recount in Michigan, according to ABC News.

In late January, though, Trump announced on Twitter that he would be requesting a major investigation into voter fraud. "Depending on results," he wrote, "we will strengthen up voting procedures!" According to ABC News, however, an executive action meant to launch the investigation stalled, and plans for the investigation were delayed indefinitely.

Some believed that Trump and his administration would simply phase out the voter fraud claims and leave the election in the past, but Trump brought the issue back up during his Fox interview. "Many people have come out and said I am right," he said. Whether Trump will produce any evidence to back up his claims, however — or whether he launches an actual investigation into the issue — remains to be seen.