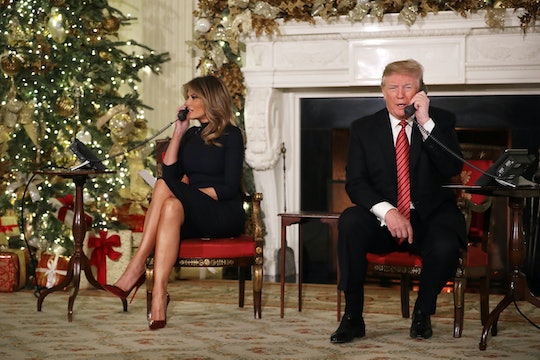 The president is very unpredictable. It's hard to guess what might come out of his mouth like, all of the time. And Trump is just as unpredictable, even when talking about Christmas. So, the way that Trump talked to a 7-year-old about Santa on Christmas Eve shouldn't come as a surprise to anyone. He really has no filter. A representative for the White House did not respond to Romper's request for comment at the time of publication.

Trump and his wife, Melania, took calls on Christmas Eve from eager children who had been calling NORAD, short for the North American Aerospace Defense Command, which tracks the location of Santa all around the world on Christmas Eve, according to CNN. These calls were from kids who might have had questions about Santa's locations, or how Santa could deliver so many presents to so many kids on one night. Whatever the case may be, these kids were calling NORAD for a reason, and that was to talk about Santa and Christmas. But Trump had another idea for conversation in mind.

During this phone call session, reporters captured Trump talking to a 7-year-old girl named Collman, according to CNN. But the conversation wasn't necessarily appropriate for Christmas Eve.

"Are you still a believer in Santa? Because at seven, it's marginal, right?," Trump asked.

"You just go enjoy yourself," Trump reportedly said as he hung up the call, according to Fox News.

You see the problem, right? Watching the video from this interaction makes it all the more ridiculous.

Not only was that comment uncalled for, but it was probably something that the little girl on the other line was unprepared to answer. Not only was she unprepared to respond to the president asking him if she is "still a believer" in Santa but imagine how her parents felt once she got off the phone. This is one Christmas surprise that they probably weren't expecting.

Especially since, by referring to Santa as "marginal," Trump completely disregarded the importance of Santa and Christmas in a young kid's life. While believing in Santa might be "marginal" for Trump, who has a lot of important things to worry about, it isn't necessarily marginal for a seven year old.

It's unclear how the caller responded to Trump's question, according to the New York Times, but the president did "chuckle and smile" after asking his questions, according to CNN. So, no one knows for certain if Collman told the president that she still believes in Santa Claus or not, according to the Washington Post. But still, this wouldn't be the most appropriate thing for anyone to say to a little kid on Christmas Day.

Although Trump's comments were a little rude and a little inappropriate, they were kind of expected, to be honest. At least, people on Twitter seem to think so, sharing their reactions to this bizarre interaction on the website.

So, based on statistics, it is still likely that Collman could believe in Santa and was confused when President Trump hopped on the phone and asked her if she was still "a believer." If people didn't see the problem with this before, then this definitely hones in on what is so problematic about the phone call.

One could only hope that Collman was more surprised by the Christmas presents underneath the Christmas tree on Tuesday than by Trump's shocking reveal on Monday night.