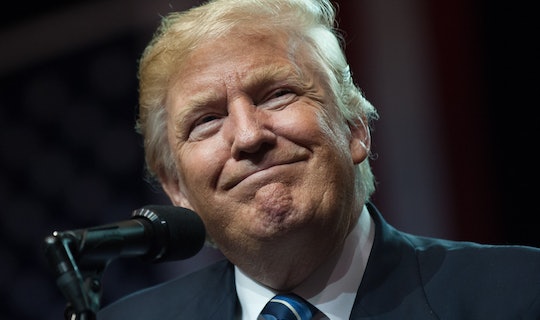 Trump Tells Fallon He's "Trying Not To" Say Shocking Things, But His Hair At Least Is Real

On Thursday night, Republican presidential candidate Donald Trump stopped by the Jimmy Fallon Show before ending the day with a speech in New Hampshire. Trump told Fallon he's "trying not to" say shocking things anymore, talked about the upcoming debate, and let Fallon touch his hair, and those were just the highlights, USA Today noted.

During the show, Fallon performed an excellent impression of Trump during the campaign — from the high pitch of Trump's candidacy announcement, to yelling his way through a speech on immigration, to the low, smooth tone he's been employing in recent appearances. Trump nodded in agreement, acknowledging his vocal journey, and praised Fallon's impression of him.

"I gotta kindly thank you for giving us the material that we've been doing. It's been amazing to follow and exciting, because you say some shocking things," Fallon said to Trump, at which the point the candidate interrupted him.

"But I'm trying not to anymore," he said, adding a smile.

It's true that Trump has been making inflammatory statements less frequently as Election Day draws nearer. Gone, apparently, are the days of a presidential candidate calling an entire nationality of people rapists or declaring that a woman journalist had "blood coming out of her wherever."

Fallon also mentioned that, when asked by CNBC about rival candidate Hillary Clinton's pneumonia, Trump responded respectfully. “I hope she gets well and I hope she gets well soon,” Trump said, adding that he got no satisfaction from knowing he was right when he speculated about Clinton being ill.

Is this the beginning of a more "presidential" Trump? While some might like to think so, it's clear he's not entirely at that stage yet. The former reality TV star couldn't help but fall back into his habit of insulting people who disagree with him, such as the Michigan pastor who interrupted Trump during a speech. He called her a "nervous mess," according to The Detroit News.

For his campaign's sake, hopefully he's able to actually maintain a respectful and calm demeanor. But the public isn't sure if this "new Trump" is really Trump, or just his campaign manager's strategy finally starting to stick.

What the public can finally be sure of, though, is that one part of Trump always suspected to be fake is, in fact, real. At the end of the segment, Trump allowed Fallon to ruffle his hair. Of course, the host seized the opportunity and did so. If everything else about Trump is unpredictable or suspicious, at least now we know this isn't. His hair is real.