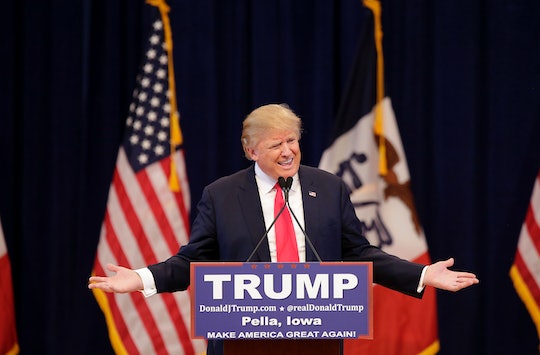 Trump Thanks Supporters By Insulting Them To Their Faces

With eight days until the Iowa caucuses, the presidential candidates are out pounding the pavement making their stump speech rounds throughout the key state. GOP hopeful and totally-man-of-the-people Donald Trump made several campaign stops in Iowa on Saturday. Speaking before a group of supporters in Sioux Center, the latest Trump soundbite is a doozy: Trump said he could "shoot somebody" and "wouldn't lose voters." Apparently, Trump thought taking a cue from fellow GOP candidate Ben "No, I really did stab a guy!" Carson might work in his favor.

But as if Trump's outrageous assessment that shooting someone makes him somehow impervious to losing votes, the context of this notion is even more awful. Trump actually looked at a group of supporters and insulted them right to their face, and perhaps even more disturbingly — they cheered him on, not even realizing that he made a sweeping, negative characterization about the intelligence of his voters. Here's Trump's quote in full:

The people — my people — are so smart. And you know what else they say about my people? The polls — they say I have the most loyal people. Did you ever see that? Where I could stand in the middle of 5th Avenue and shoot somebody and I wouldn't lose any voters, okay? It's like incredible.

It's actually pretty impressive how Trump goes from praising to deriding his very own supporters in seemingly one breath. The crux of Trump's issue here is that he's confused loyalty with intelligence. He starts off by saying how smart his supporters are but then says they'll still vote for him even if he shoots somebody.

So like, I'm not trying to throw Godwin's law this or anything, but you know who else willingly and blindly followed their leader no matter what he did? (Adolph Hitler. The answer is Hitler.)

Despite Trump's usually outspoken Twitter feed, he had little to say following the video release of his speech in Sioux Center, tweeting his speech was "very well received."

Could his "shoot somebody" line be the most outrageous statement that Trump has made on the campaign trail? Forget about the absurdity of the statement — let's just consider the timing for a moment: After four people were killed in two school shootings Saskatchewan, Canada on Friday; after there have already been five mass shootings in 2016 already; after President Barack Obama spoke before the nation on Jan. 5 calling for common-sense gun safety reform — after all of this, Trump tossed out this off-the-cuff, flip little dollop of praise for his supporters like he was the cleverest man in the room.

And his supporters ate it all up hook, line, and sinker while Trump just smiled with that sh*t-eating grin:

If that isn't the most back-handed compliment to potential voters, I don't know what is.

The Iowa caucuses will take place on Feb. 1.