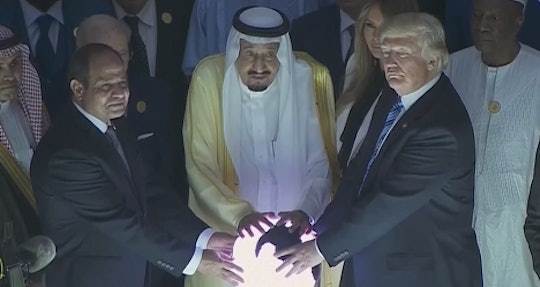 What's the deal with those images of President Donald Trump standing around a glowing orb, placing his hands on it alongside two other men? Well, the internet is pretty curious to know the answer to that too, but while waiting to find out, social media users took it upon themselves to turn the moment into a meme — because what else does the internet do with any newsworthy moment like that, really? Now, Trump and the glowing orb memes and jokes are all over Twitter and other social media outlets, and some of the best ones will have you laughing your way through the rest of this first day of the work week.

According to NPR, during his first foreign trip as president, Trump attended the gala inauguration of the Global Center for Combating Extremist Ideology — which is meant to be an institution for the cooperative effort to confront extremism — and during that event, Trump joined Saudi King Salman and Egyptian President Abdel-Fattah el-Sissi in putting their hands on a lit-up globe. This raised some eyebrows when images and video came out, but there was a reason for the photo opportunity.

According to the New York Times, "the orb was in fact a translucent globe, with the world’s waters represented in light gray and the continents in black. Its purpose appeared to be decorative." NPR reported that the miniature globe "officially activated the center and launched a splashy welcome video."

But to the internet, it was so much more than that.

Twitter users made every pop culture reference imaginable in captions of the image.

Twitter user @ShahakShapira tweeted, "I PHOTOSHOPPED SARUMAN INTO TRUMP'S ORB PICTURE AND IT'S NOT EVEN WEIRD," and included the image in question.

And author Lauren Southern tweeted, "I for one welcome our new orb overlord."

@TibiusReynolds made sure everyone knew that cropped image wasn't telling the real story of what was going on in that room — and in fact, a wider shot is somehow even creepier than the viral moment appeared to be. "It was unfair to show the orb photo cropped. Here it is with full context and it is not weirder at all", they tweeted.

Business Insider reported on the particulars of the Center and the ceremony where the orb was touched, but noted that "the seriousness of the center didn't stop people on the internet from joking at the sight of Trump touching the glowing orb." And it sounded like the moment in real life was a little surreal and silly to some people anyway.

According to the New York Times, the moment was especially fitting for Trump, a former reality TV show host, because "the globe did not appear to have any magical powers, but when the king and Mr. Trump touched it, background music of the kind that might accompany a reality show’s elimination sequence or introduce a cable news program soared and pulsed." So it was somehow even weirder in reality than many Twitter users even thought.

And the literature and pop culture references some Twitter users made were easily some of the funniest reactions to the moment. @darth tweeted, ""find...the...hobbit...," and turned the orb into the Eye of Sauron of Lord of the Rings fame.

Twitter user @TheSpaceHamster made a similar LOTR reference, tweeting, "Spicer: the president has not and will never use the orb to talk to sauron

But this one was one of my favorites, as I'm a huge Harry Potter fan. @ChaseClynch_ tweeted the now infamous image, and captioned it, "Why does this look like the scene in Harry Potter where the death eaters find the prophecy orb in the department of mysteries"

In any case, Trump's encounter with the orb is not a moment the internet is going to let him forget any time soon.