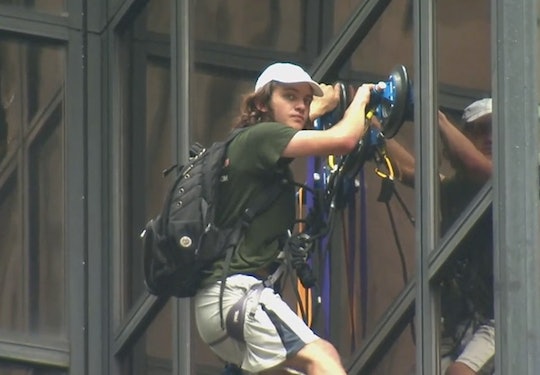 Just after 4 p.m. on Wednesday, New Yorkers were treated to a quite a spectacle when a shaggy-haired man in khaki shorts attempted to scale the side of Trump Tower in Manhattan, with the help of five giant suction cups. It’s not entirely clear yet what motivated the man — who’s only been identified as Steve from Virginia — to make it to the top of the real estate mogul’s 68-story building. Some reports say it was to get the billionaire's attention. But, it is clear that these Trump Tower climber memes and jokes will make you glad that the political discussion gets to take the backseat for a moment.

The climber reportedly reached the fifth floor a little after 4 p.m. on Wednesday, drawing in police officers and first responders in addition to hundreds of onlookers. Videos on social media show that the man paused momentarily to put on a baseball hat and take a few sips of an energy drink.

Police then attempted to intercept the climber twice — once by opening an air conditioning vent on the building and next by smashing an entire window above him, but he got away both times, showing some spider man level agility.

(Meanwhile, in case anyone cares, Republican presidential candidate Donald Trump was speaking at rally in Abingdon, Virginia, more than 500 miles away from the totally chaotic and very amusing scene, and totally missing out on all the fun.)

By 5:20 p.m., the climber reportedly reached the 17th floor. According to ABC News, roughly 30 minutes later, he made it to the 21st floor and police were trying to "talk him in."

Just after 6:30 p.m., almost three hours after the climb began, police yanked him in through a window, putting an end to the extravaganza on the 21st floor.

Even though police put a stop to the Trump Tower climber, social media has been on fire with reactions since it started. These memes and jokes show that people were more than ready to have a little fun with it:

After an hours-long standoff, information about the #TrumpClimber began to surface on social media. In an unverified video posted on YouTube on Tuesday, Aug.9, which was entitled "A Message to Mr. Trump: why I climbed your tower," the man identified himself as an "independent researcher seeking a private audience" with Trump.

"The reason I climbed your tower was to get your attention," the man said in the video, urging viewers to make this video go viral to Trump might see it as well as asking anyone who was watching to vote for the Republican candidate. He added, "I guarantee it is in your interest to honor this request. Believe me if my purpose was not significant I would not risk my life pursuing it."

If the man in the video turns out to be the the actual climber, well, he was certainly successful in grabbing a huge audience, even though his motivation to scale the skyscraper wasn't what people were expecting.

And if nothing else? At least everyone in Manhattan had a thoroughly interesting coffee break.