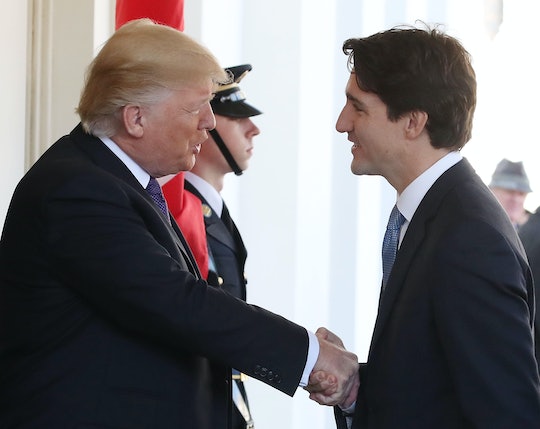 Canadian Prime Minister Justin Trudeau met with President Trump at the White House on Monday, a formal event of transnational import that resulted, of course, in invaluable internet memes. The two men discussed policy matters such as the North Atlantic Treaty Organization (NATO) and gender disparities in the business world, all while delicately avoiding confrontation over Trump's immigration ban. But we all know, deep in our hearts, that Trump and Trudeau handshake jokes and memes are the real takeaways from this historic day.

This focus on handshakes has context. Over the weekend, Trump hosted Shinzo Abe, Japan's prime minister, and their undeniably awkward handshake in the Oval Office was widely viewed and publicized. This seemed like an unwanted sequel to the bizarre handshake that transpired between Trump and Supreme Court nominee Neil Gorsuch last month, during which Trump seemed to pull Gorsuch toward him, while still grasping his hand. And so when Trump's smallish hand first approached the vicinity of Trudeau's youthful one, the world was watching.

Two notable handshakes occurred on Monday. The first, and arguably the more important, took place when the two men first greeted one another outside the White House. It sure seemed like Trudeau consciously refused to be victimized by Trump's notoriously masculine handshake, which is characterized by Trump aggressively pulling the victim in his direction (intended or otherwise) and not letting go.

The internet was quick to comment on 45-year-old Trudeau's technique. The best jokes placed Trump and Trudeau into a gorilla or chimpanzee bicep-flexing, show of dominance metaphor — because that's so obviously what was going on here.

Other commentators bypassed animal kingdom analogies in favor of analyzing Trudeau's technique. The prime minister, who won Canada's federal election in 2015 as a representative of the Liberal Party, emphatically pulled Trump's hand toward his, despite the president's efforts to dominate the handshake.

The impression that Trudeau was consciously aware of his handshake methodology was only enhanced later in the day, in the Oval Office, when handshake number two occurred. Trudeau waited for Trump to offer a hand before accepting it in return. And honestly, can we blame Trudeau for being on the defensive? Trump's recent handshakes have been a tad bit on the frightening side. These are handshakes that could cause harm: bruised wrists, sprained phalanges. Trudeau's bodily integrity was at stake, and he came prepared. (All kidding aside, no one likes an aggressive handshake, Trudeau seemingly least of all.)

In the second before reaching for Trump's extended arm, Trudeau looked down at it suspiciously. This moment, caught by a Reuters photographer, became immediate fodder for memes, and some of these memes astutely commented on the history of where Trump's hands have unfortunately, allegedly, been.

And in the moments surrounding the handshake, Trudeau had a vaguely pained expression. He even seemed to be gritting his teeth:

All told, though, perhaps we're all making too much of these handshakes. If it weren't for that first handshake, the second one might not have seemed so significant. As one person pointed out on Twitter, the handshake was really quite brief — as would be expected in a handshake from anyone but Trump.

Whatever the pop psychology of the handshakes, the good news is that the meetings between Trump and Trudeau reportedly went well, despite their known differences. Handshakes are, after all, a signal of friendship, and we can all hope that the friendship between these two men, even if strained, will continue.

More Like This
New Barney Docuseries Will Dive Into The Dark Side Of The Beloved '90s Kids' Show
Every State’s Favorite Halloween Movie For Kids In 2022
What Parents Need To Know After DEA Issues Warning About "Rainbow Fentanyl"
New 'CoComelon' & 'Blippi' Halloween Episodes Are Coming — & We Have Sneak Peeks!