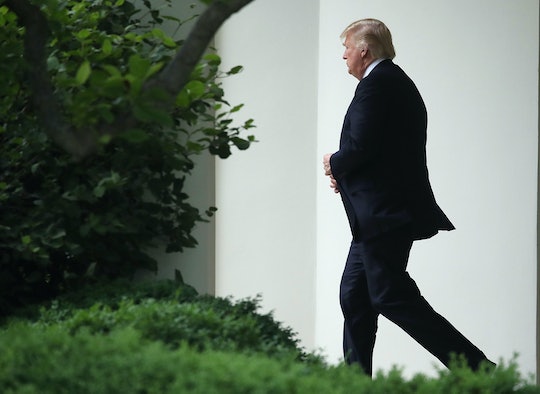 Hours after President Donald Trump ordered a trusted aide to deliver a termination letter to the office of FBI Director James Comey, he took to Twitter to issue a scathing message to critics who had begun to question his motives. The president's target? Minority Leader Chuck Schumer, who had called into question the decision to fire the director in the middle of an ongoing investigation into potential ties between Trump campaign officials and Russia. In his tweet about Comey and the termination decision, Trump lambasted the minority leader, tagging the tweet with the hashtag #draintheswamp.

"Cryin' Chuck Schumer stated recently, 'I do not have confidence in him (James Comey) any longer,'" Trump wrote. "Then acts so indignant. #draintheswamp."

A short while earlier, Schumer himself had taken to the podium at a last-minute press conference to cast doubt on the president's decision to fire Comey. While deputy Attorney General Rod Rosenstein wrote in an official memo that the reasoning behind Comey's termination was his mishandling of the Hillary Clinton email investigation during last year's campaign, many have since called the White House's apparent bluff, noting that Trump himself previously and on numerous occasions applauded Comey's decisions in relation to the scandal. On Tuesday night, Schumer joined the chorus of critics.

"Earlier this afternoon President Trump called me and informed me he was firing Director Comey," Schumer said from the lecturn. "I told the president, 'Mr. President, with all due respect, you are making a big mistake.’" He continued,

It is troubling that Attorney General Sessions, who had recused himself from the Russian investigation, played a role in firing the man leading it.

However, on Tuesday night, Trump's response seemed to dismiss any legitimate concerns about that trend, placing the blame yet again on others' "flip-flopping."

While it is true that Schumer and many others troubled by Comey's dismissal were not the director's biggest fans, the minority leader made a valid point in a separate tweet that summed up his and many others' feelings well: "If we don't get a special prosecutor [to lead the ongoing Russia investigation now], every American will rightfully suspect that the decision to fire Comey was part of a cover-up." Trump may argue that the decision to dismiss the former FBI director was motivated by Comey's missteps during the Clinton email scandal, but to the majority of Americans, that certainly doesn't appear to be the case.