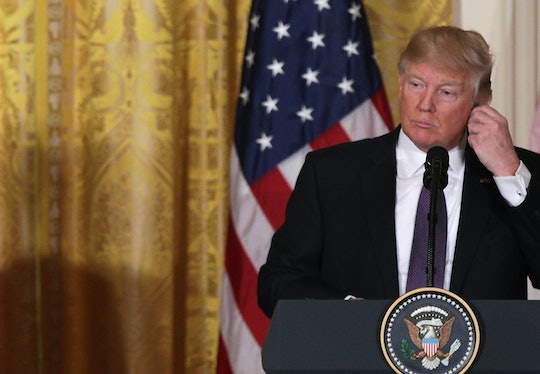 On Tuesday, The New York Times released an explosive report with unnamed sources in the intelligence community alleging that several aides to President Donald Trump were in communication with Russia during his presidential campaign. Aides named by intelligence officials included both Trump's former campaign manager Paul Manafort and former campaign security advisor Roger Stone. Trump has already gone on the defensive Wednesday morning on Twitter. Trump's tweets about the Russian communication allegations are — in a surprise to no one — dismissive of the report as "fake news," but also deflecting attention away from potential collusion between his campaign and Russian intelligence officials. The White House didn't immediately respond to Romper's request for comment.

The intelligence sources who spoke to the Times said, though there's clear evidence of communication, "they had seen no evidence of such cooperation" that would indicate collusion, which would be treasonous. Still, the timing of the Times report is highly intriguing, given that the Times broke this news just one day after Michael Flynn's resignation as national security adviser because of communications with the Russian ambassador prior to Trump's inauguration. Flynn's communications with Russia may have been illegal, in direct violation of the Logan Act.

Trump's attempt to discredit the media not only referenced "fake news media," but also called the Russian communication report "conspiracy theories." This isn't the first time that Trump has lashed out at the media on Twitter; given the building momentum of the Russian communication allegations, it certainly won't be his last attack on the media, either. It's still hard to fathom that Trump still appears to have complete unrestricted and at times, unfiltered, access to Twitter.

Trump's next tweet on the subject was about "Hillary Clinton's losing campaign" — specifically that this "conspiracy theory" of a report from The New York Times was some kind of attempt by the Grey Lady to cover up Clinton's failed campaign. I feel like someone needs to remind Trump that he won the election and that he's actually POTUS now.

In another attempt at deflection, Trump also tweeted about the previous administration's stance on the Russian annexation of Crimea.

Trump again took a dig at both The New York Times and The Washington Post, two publications that have been most aggressive in their investigative journalism since Trump took office.

Trump also called out the intelligence community for leaking classified information to the press, calling the act "very un-American." (Though Trump had no issue with leaked information when it was bad for Clinton's campaign during the election...)

But this is one of those rare moments when I hate to agree with Trump, as he does have a point. Leaking classified information is a crime. Thankfully, journalism shield laws should protect these unnamed intelligence sources, enabling them to continue releasing more information about alleged communication and possible collusion between Trump's camp and Russian officials before, during, and after the election.

That said, don't let Trump's "unfiltered granddad on social media" act fool you: His last tweet on the Russian communication allegations on Wednesday is far more carefully calculated than you might think. By demeaning America's own intelligence community with both the use of quotes around "intelligence" and even the word "candy," Trump is simultaneously trying to discredit the reports while using emotionally charged language — something Trump supporters practically foam at the mouth over — to discredit the intelligence community itself. By calling the intelligence community "un-American" for its leaks, Trump is doing everything he can to keep the same from being said of him and his White House advisers.

No matter how Trump tries to spin the situation on Twitter, make no mistake: The story isn't that the intel community could sink itself with its flurry of leaks to the press — it's that our nation has entered uncharted and dangerous waters of Russian influence in U.S. politics, the likes of which have never before been seen.