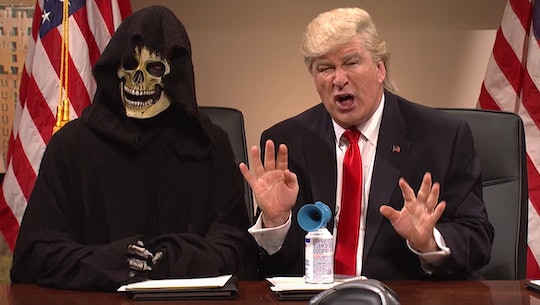 For many Americans still shocked and devastated that Donald Trump is going to be our next president, it's tough to witness him filling his Cabinet with reported racists and billionaires, idly announcing that Americans should lose their citizenship for exercising their First Amendment rights, and embarking on a "thank you tour," allegedly instead of attending intelligence briefings. But for the president-elect, it's Saturday Night Live's most recent parody of him, which is frighteningly aligned with real life, that's "unwatchable." This time, Alec Baldwin's impersonation of Trump took aim at his incessant tweeting habit, and the real-life president-elect further proved that point himself shortly thereafter: Before the show was even over, Trump tweeted about SNL's "Trump tweets" sketch, declaring that it's just "not funny," apparently without considering how accurate it really may have been.

Throughout the sketch, an easily distracted Baldwin-as-Trump repeatedly retweets random people during a policy briefing while aides desperately try to school him on international issues. "He's 16, and he's in high school, and I really did retweet him," Baldwin's Trump says after sharing the tweet of a young supporter criticizing a CNN journalist with his millions of followers — as the real Trump truly did just days ago. "Seriously, this is real."

As the aides — who really want to fill the future president in on the situation in Syria — grow more exasperated, Kate McKinnon as Trump's former campaign manager and current transition team member Kellyanne Conway offers an explanation as to why her boss won't stop tweeting: "To distract the media from his business conflicts and the very scary people in his Cabinet."

But Baldwin as Trump has a simpler reason. "I do it because my brain is bad," he says. And his thought process certainly is different from that of presidents who have come before him. In the sketch, he interrupts the briefing — of which the real Trump has reportedly received only three, despite President Obama's offer for daily sessions — by retweeting unhinged-seeming characters. One gets a retweet from the president-elect despite (or because of?) having a profile picture that shows "a skull with two big guns going through its head" and the word "infidel." Another man, describing his Twitter bio to his date in a cutaway scene (it reads "Liberalism is a mental illness"), gets a Trump retweet as well. Both, as the cast emphasizes, were real retweets from the president-elect. Trump does actually have a history of retweeting from accounts dedicated to white supremacy.

So, despite the fact that he has recorded his distaste for the show on Twitter, both during the campaign and since his election, proving the skit's point, Trump apparently tuned in once again on Saturday night, tweeting angrily before the comedy show was even over. "Just tried watching Saturday Night Live - unwatchable!" he wrote, doing exactly what SNL had mocked him for. "Totally biased, not funny and the Baldwin impersonation just can't get any worse. Sad"

It's clear, though, that what the creators of SNL find really "sad" is Trump's inability or unwillingness to take on the immensely important tasks of president. In the skit, Baldwin's Trump becomes increasingly nonsensical and offers up ineffective solutions for each of the dire issues the alarmed aides present him: the increasing instability in Pakistan ("Should I call them?"), North Korea's ongoing nuclear tests ("Should I text them?"), and the volatility of Iran ("Should I have Ivanka send them some shoes?").

Trump turns to Twitter to vent many of his frustrations, which is a practice that's proven deleterious but ultimately expedient for him in the past. It's makes sense that he'd use the platform to rail against SNL for calling him out on it, too.