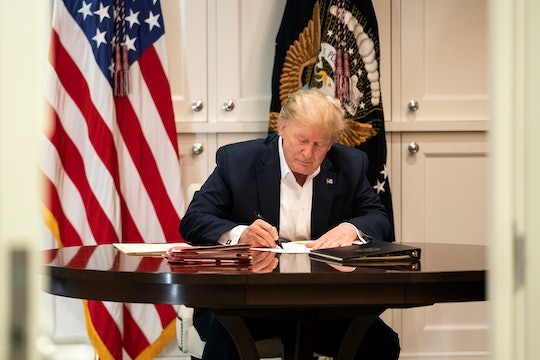 On Monday, three days after he was admitted to Walter Reed Medical Center for treatment of the novel coronavirus, President Donald Trump revealed plans to leave the hospital and urged people not to fear COVID-19 or allow it to "dominate" their lives.

The president, who has long been criticized by Democrats for how he has responded to the ongoing coronavirus pandemic, then appeared to downplay the seriousness of testing positive for COVID-19. "Don't be afraid of Covid. Don't let it dominate your life," he tweeted. "We have developed, under the Trump Administration, some really great drugs & knowledge. I feel better than I did 20 years ago!"

Trump's tweet urging people not to be afraid of COVID-19 or allow it to "dominate" their life comes as John Hopkins reports more than 7.4 million people have contracted COVID-19 and more than 210,000 people have died from the virus in the United States.

But while 74-year-old Trump has said he's currently feeling better than he did 20 years ago, his doctors have cautioned the president isn't in the clear just yet. Speaking before reporters shortly after Trump announced he would be checking out of Walter Reed that night, White House physician Dr. Sean Conley said that although Trump's condition had "continued to improve" over the course of the last day, he "may not entirely be out of the woods yet," CNBC reported.

According to CNBC, Conley told reporters the president's doctors were "cautiously optimistic" about Trump's recovery, but noted they were "in a bit of uncharted territory" when it came to his treatment regimen.

Doctors revealed Sunday that Trump's blood oxygen level had dropped twice since he had been diagnosed with COVID-19 on Friday, requiring medical intervention, The New York Times reported. Trump's medical team also revealed the president had been put on dexamethasone, a steroid drug that has generally been used in severe cases of COVID-19, according to the NYT.

While the president has been treated at Walter Reed, First Lady Melania Trump, who also tested positive for COVID-19 on Friday, has remained at the White House. After tweeting that she was experiencing "mild symptoms" on Friday, the first lady reported she was "feeling good" on Monday and "will continue to rest at home."

Since the Trump's COVID-19 diagnosis, a handful of other White House staffers have also tested positive for the virus, including White House Press Secretary Kayleigh McEnany and Kellyanne Conway.

As of Monday afternoon, the president had not gone into specifics regarding his plans to leave Walter Reed and quarantine at the White House.