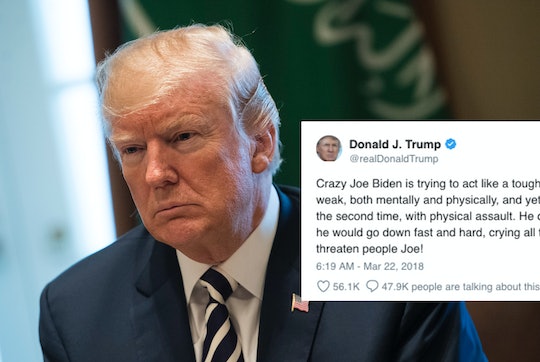 Trump *Actually* Tweeted That Joe Biden Would "Go Down Fast" If They Fought, & Twitter Is Livid

The President of the United States took to Twitter early Thursday morning to let "Crazy Joe Biden" know that he'd lose in a fight, and suggest that he don't threaten people. Trump said Biden would go down "fast and hard, crying all the way." Twitter users, of course, are not having it.

Yes, you read that correctly: Trump has hit out at former Vice President, 75-year-old Biden, who is supposedly trying to "act like a tough guy," according to Trump's tweet. Biden reportedly said he'd have "beat the hell out of" Trump over the comments he's made about women if they'd gone to school together, The Independent reported.

Biden said at an anti-sexual assault rally at the University of Miami on Tuesday, according to The Independent:

A guy who ended up becoming our national leader said, 'I can grab a woman anywhere and she likes it.' They asked me if I’d like to debate this gentleman, and I said no. I said if we were in high school, I’d take him behind the gym and beat the hell out of him."

And lest you thought Trump would actually apologize for his vulgarity against women, he, like an actual school-aged bully with raging testosterone, responded by tweeting what basically reads as, "Come at me, bro."

But Twitter never fails to disappoint, and users of the platform are responding in fury and, frankly, disbelief — though how anyone would be surprised by anything Trump spews these days surprises me, too.

Let's not forget that fact that the first lady just launched a cyber bullying campaign two days ago, too. Melania Trump hosted representatives from several leading online and social media companies for her first public event on the topic since she entered the White House, according to Politico.

"I’m well aware that people are skeptical of me discussing this topic," she said in her opening remarks during the cyberbullying summit at the White House, Politico reported. "I have been criticized for my commitment to tackling this issue and I know that will continue."

At least she's more self aware than her husband. And she said that the criticism won't stop her from doing what's right — advocating for safer spaces for children and teenagers on the web. I can respect that, and I appreciate the effort. I just wish we had a leader who, you know, would lead by example.

And, evidently, as does a good chunk of Twitter...

Trump's stern warning to Biden on Thursday isn't the only time he told Biden he'd fight him, either. At a rally in Florida in 2016, he also told Biden that he'd take him behind a barn, according to The New York Post.

Again, like a bully rallying up the other kids on the playground (instead of rallying them for an upcoming presidential election), Trump said, according to The New York Post, "I’d love that. I'd love that! Mr. Tough Guy. You know, he's Mr. Tough Guy... Some things in life you could really love doing."

Again, Trumps comments reportedly followed Biden admitting that he wished he was in high school with Trump so he could "take him behind the gym" — a remark he made after press asked if he wished he were debating Trump, The New York Post reported.

To be fair, Trump's not actually starting these hypothetical throw-downs. But... Biden's comments this time were made at an event about sexual assault, regarding the 2005 tape in which Trump bragged about being such a "star" he could grab women "by the p*ssy." So I would say Biden's turn of phrase, which he reportedly meant as a colloquial way of saying he would've done something about Trump's actions against women and the way Trump talks about them. Biden later clarified that he was stressing that's what he would've done if he were in high school, not as a grown adult who understands assault, according to The Independent:

The adult version of Trump, however, doesn't quite seem to grasp the whole concept of assault. Or cyber bullying. But why would anyone expect that of the president of the United States?