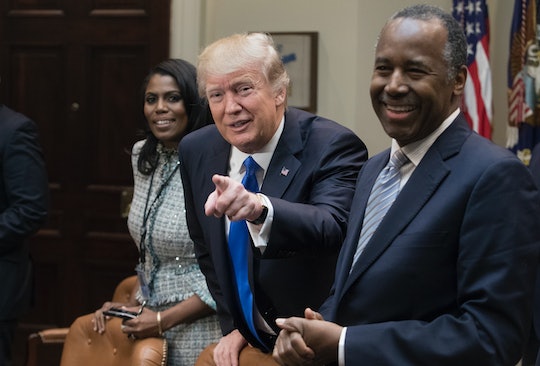 According to TMZ, a senior administration official told to the website that President Donald Trump wants to change Black History Month to "African American History Month" — for... reasons, I guess? The unnamed official said that Trump felt the term "black" was outdated and that he believes the appropriate term should be African American. So glad we have a white guy to clear up that whole mess for us, am I right?

Have I turned into Bill Murray from Groundhog Day? Am I just living the same nightmare over and over again? Oh no, it's just Trump's 14th day in office, nothing more. Romper has reached out for comment to the White House but has not yet heard back.

Let's take a closer look at this presidential proclamation, shall we?

The first paragraph extols the accomplishments of famous Black people in American history. Sadly, it reads like Trump tried to write a book report for Hidden Figures except he didn't actually read the book and only watched the movie instead — oh, and forgot the two other major protagonists. The rest of that first paragraph then reads like a White House intern did the laziest search of "famous African Americans" ever and skipped over the more obvious choices like Dr. Martin Luther King, Jr. or Frederick Douglass — who is the only famous historical Black man that Trump can name and also believes is still alive.

Paragraph two talks about the importance of education, particularly in our African American communities. So, tell me again Mr. President why you nominated Betsy DeVos for Secretary of Education, a woman with zero educational experience in a classroom, and who favors school vouchers and the school choice — which is known to increase inequality among minority students?

And then there's this gem, from the same paragraph: "teaching and reflecting upon the many roles African Americans have played in building this Nation and driving it forward." Oh, you mean building our nation like... slavery, perhaps?

Putting aside all the commentary on Trump's presidential proclamation itself, there's a much bigger point about why the name change is just wrong: Not all black people in America are of African descent, nor do they choose to identify with a hyphenated ethnicity that groups all 54 African nations into a continental label. And what about those Americans who are generations removed from their slave ancestors? Are they really African American? What about biracial Americans who are part black? We don't call them half-African American. Should we call Charlize Theron African American too, since she's from South Africa?

This completely unnecessary pomp and circumstance comes just a day after Trump delivered a baffling, rambling speech about Black African American History Month on Wednesday at a "little breakfast" with several prominent African American leaders. Trump then launched into yet another tirade against the media — because that was a completely appropriate time and place to do that.