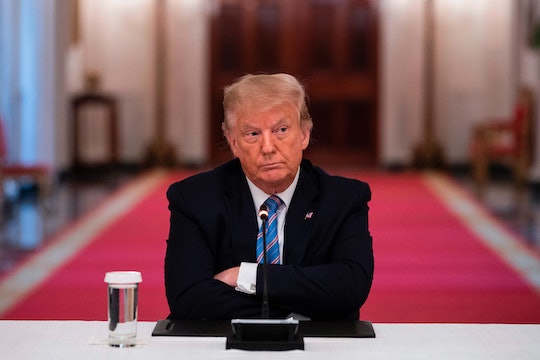 As if 2020 hasn't been tough enough already, President Donald Trump has suggested delaying the upcoming presidential election. On Twitter, the president claimed that having Americans vote by mail this year, due to health and safety concerns surrounding the ongoing coronavirus pandemic, would lead to fraud, a claim that has not been backed up by evidence and has actually been found to be quite rare.

"With Universal Mail-In Voting (not Absentee Voting, which is good), 2020 will be the most INACCURATE & FRAUDULENT Election in history," Trump tweeted Thursday. "It will be a great embarrassment to the USA. Delay the Election until people can properly, securely and safely vote???"

According to the Brennan Center for Justice at New York University Law School, "there is no evidence that voting by mail results in significant fraud." Additionally, University of Chicago political scientist Anthony Fowler explained in article for the University of Chicago's Harris School of Public Policy that "voter fraud is very rare, and the risk of widespread fraud is probably very minimal, even with all-mail elections."

The MIT Election Data & Science Lab notes that while vote-by-mail ballots are "not as secure" as voting in person because there are risks that ballots could be intercepted while en route, "documented instances" of fraud happening through mail-in ballots are rare.

"No means of voting is perfect, but the benefits of vote-by-mail — particularly during a pandemic — greatly exceed the risks of fraud associated with it," election law expert Richard Hasen, who is also a professor at the University of California, Irvine, recently told NBC News.

This is hardly the first time Trump has suggested that mail-in voting is unsafe. Back in May, for instance, he claimed "kids go and they raid the mailboxes and they hand them to people that are signing the ballots down the end of the street which is happening, they grab the ballots." And just last week, according to ABC News, Trump said he thinks "mail-in voting is going to rig the election."

So despite Trump's desire to delay the election, can he? According to Ellen Weintraub from the Federal Election Commission, no he cannot. "No, Mr. President. No. You don't have the power to move the election. Nor should it be moved," Weintraub tweeted Thursday. "States and localities are asking you and Congress for funds so they can properly run the safe and secure elections all Americans want. Why don't you work on that?"

The only entity that can delay an election date is Congress, and there are no plans to change it. "There will be no delay in the #2020Election. Congress sets the election date, and it should not be changed. It will be held on November 3rd, as planned and required by law," Republican Illinois Rep. Rodney Davis tweeted on Thursday.

As it stands, the 2020 presidential election will take place on Nov. 3 and if you'd like to vote by mail, be sure check your state's requirements as each one has different rules, ensure you are registered to vote, and if possible, request a ballot.