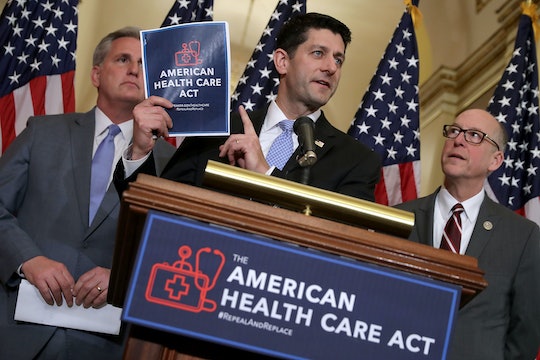 Ever since House Republicans introduced a draft of the American Health Care Act (the AHCA, or Trumpcare), the bill intended to replace Obamacare, debate has swirled over who will lose and who will benefit under the new law. Prominent Republicans have emphasized that the bill offers American families "choice" — whatever that means. Unfortunately, amid their focus on fiscal conservatism and "choice" in health care, Trumpcare advocates entirely disregard pregnancy and childbirth in their arguments — despite the fact that loss of coverage in these areas will significantly reduce, not enhance, the options available to American families.

According to a damning report out this week from the Congressional Budget Office (CBO), the AHCA will result in 24 million Americans losing insurance coverage by 2026. Importantly, the source of coverage loss will alter dramatically over time. Initial coverage loss will be individuals choosing against enrollment in health marketplace plans when the individual mandate is repealed. According to the CBO, these are likely to be people who "chose to be covered by insurance under current law only to avoid paying the penalties, and some people would forgo insurance in response to higher premiums."

Perhaps these are the people Health and Human Services Secretary Tom Price was referencing this Sunday on Meet the Press, when he told Chuck Todd that under Trumpcare, American families "can select the kind of coverage that they want for themselves and for their family, not what the government forces them to buy." And yet the CBO report highlights that the type of coverage many families will "choose" will be no coverage at all.

After this initial loss from people choosing against a plan, though, there will be forced attrition when the Medicaid expansion is phased out in 2020. The CBO predicts that 10 million people will lose Medicaid coverage by 2026 — not by choice, but because they will not longer be eligible. And many of these people will be low-income women, children, and families.

Historically, Medicaid has been a vital source of health care for low-income pregnant women. According to the Center for American Progress, laws that extended Medicaid to pregnant women in the 1980s and '90s "led to a significant reduction in infant mortality." Since the '90s, all 50 states have been required to offer Medicaid to pregnant women earning incomes at or below 133 percent the federal poverty level (FPL). This coverage extends to childbirth, and at present, 45 percent of American births are covered by Medicaid — an alarming number that says a lot about how many American families are living in poverty.

An unfortunate quirk exists, though, in Medicaid coverage for pregnant women: many women lose coverage 60 days after they give birth. This is where the Affordable Care Act's Medicaid expansion came in. Under the expansion, all low-income individuals with incomes at or below 133 percent the FPL — not just specific categories, like pregnant women or the disabled — are eligible. This is vital for low-income women of childbearing age who might be dealing with the health consequences of pregnancy and childbirth far outside the time window of when they're actually pregnant. This is part of why the American College of Obstetricians and Gynecologists (ACOG) made a strong statement in support of the Medicaid expansion back in 2013, writing:

By [the Medicaid expansion's] basing eligibility solely on income, low-income pregnant women, who in the past would have lost their Medicaid coverage after delivery, will retain Medicaid insurance coverage. The American College of Obstetricians and Gynecologists (the College) fully supports the expansion of Medicaid as proposed in the ACA.

Under Trumpcare, it is this precise category of women — those who qualify for Medicaid while pregnant, but not after delivery — who will lose coverage in the 31 states that elected to join the Medicaid expansion. According to health policy expert Sarah Kliff at Vox, loss in health coverage to low-income Americans "helps explain why AHCA would reduce the deficit: The bill is spending a lot less money on entitlement programs."

To make matters worse, the current draft of Trumpcare would strip funding to Planned Parenthood, which is an important source of birth control for low-income women. According to the CBO report, losing access to Planned Parenthood's contraceptive services would result in "several thousand" additional Medicaid-covered births in just a one-year period. The CBO estimates that Medicaid expenditures for these births, along with Medicaid for the babies, would increase "direct spending for Medicaid by $21 million in 2017 and by $77 million over the 2017-2026 period."

And yet, leading congressional Republicans claim that the ACA is fiscally irresponsible. At his own website, Speaker of the House Paul Ryan writes, "Medicaid is meant to offer affordable care to those with limited financial resources including: low income children, parents, women who are pregnant and seniors. Unfortunately, the program’s costs are bursting at the seams." This troubling pairing of sentences seems to imply that providing health care to our society's neediest isn't worth a budget that bursts at the seams. And yet somehow it makes sense to enact Planned Parenthood cuts that would result in a CBO-estimated $77 million added to Medicaid spending?

It doesn't add up. Looking at the facts, what does add up is that at core, Trumpcare simply does not prioritize the lives and health of women.