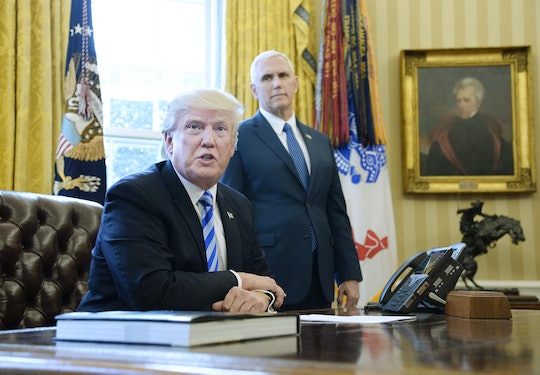 Trumpcare Is One Step Closer To Being Passed

While people were tuning in to watch former FBI Director James Comey's testimony in front of Senate on Thursday, politicians were still working. Even though Comey's testimony was one of the more interesting and exciting things to happen in Washington D.C., politicians were working hard to do the opposite — make things less exciting for their constituents. On Thursday, Senate Republicans paved the way for the American Health Care Act to go through, which means that Trumpcare is one step closer to being passed in Senate, and it does not look good.

While Comey was testifying and answering questions, Sen. Majority Leader Mitch McConnell fast tracked the bill to "skip over the committee process," according to The Hill, and be placed on the calendar for Senate vote. This means less reviewing (and debate) from Senate and less time until we might actually see the bill actually become a law. Kind of scary, considering the fact that many people are not in favor of Trumpcare and the potential impacts of the bill are still being sorted out. Before long, people could be victim to Trumpcare if Senate Republicans are motivated to get this bill passed.

Just how soon will the AHCA be voted on? According to ThinkProgress, McConnell is trying to get a vote on the health care bill before July 4, or before Congress leaves for August recess (they get the whole month away from the capitol). Yep, you read that right; Trumpcare could be voted on in Senate, less than 30 days from now. That is terrifying.

Also during Comey's testimony, according to Vice News, three Republican senators who had been "resistant" to supporting the bill also came together to come up with a potential solution to address their concerns about the bill's cuts to medicaid in the form of an amendment. But with this change of heart from these Republican senators, the AHCA isn't exactly close to being passed.

According to The Hill, the bill has a "narrow path" of making it through Senate and can only afford to lose two Republican senators on the vote to the concerns of constituents. And if passed in Senate, according to Vice News, Senate must "negotiate a compromise with the House of Representatives, and pass the bill again."

While Comey's hearing served as a helpful distraction from Trumpcare and it's impacts, it is time to re-shift focus back to healthcare. Call your senator, let them know your concerns. Your voice matters and you can help shift the vote.